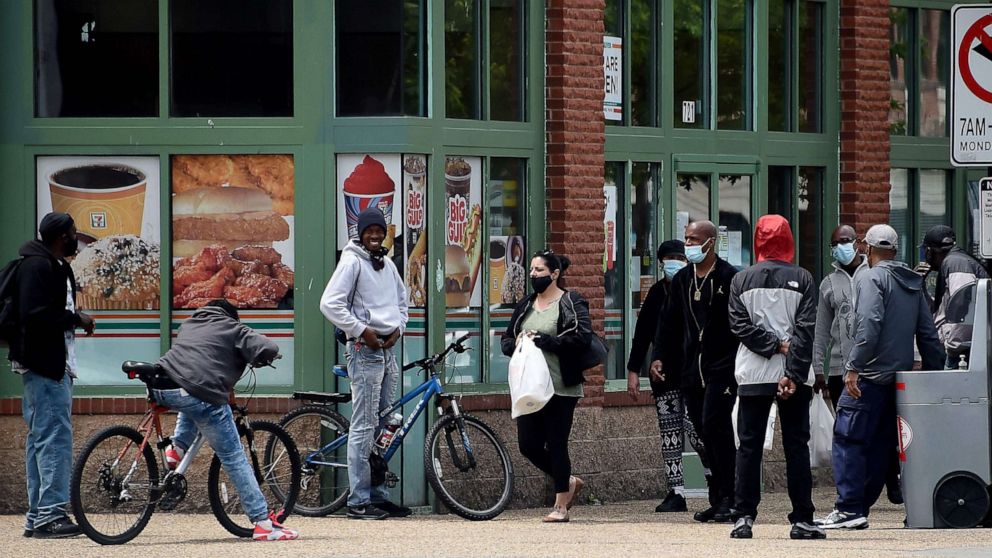 On the outskirts of the nation's capital, some of Washington D.C.'s poorest residents say they were suffering long before the coronavirus hit.

"Welcome to Washington. It is the last colony, or the last plantation dependent on your orientation," Wheeler said.

However, low-income areas of the city have fewer resources. In Ward 8, a predominantly black community located in southeast Washington D.C.--one of the poorest areas of the city with a median income of roughly $34,000--there is only one major supermarket for more than 80,000 residents. In Ward 3, which is predominantly white and is D.C. 's wealthiest area, there are 10 grocery stores for approximately the same amount of residents.

Ward 8 resident Rahnikka Byrd, treks to Maryland to purchase better quality food at more affordable prices. A trip to the supermarket could take an hour by bus, making grocery shopping both difficult and inconvenient.

"Between the actual transportation to get to the store, then the waiting in the line to get in the store...It's pretty much a half a day effort just to come to the grocery store," Byrd said. She joined the more than 38 million Americans who have filed for unemployment during the pandemic.

Experts say the lack of access to quality food is costing lives. During a Harvard University forum on vulnerable communities and health inequality amid the COVID-19 pandemic, held on April 28, Dr. Mary Bassett, Director of the FXB Center for Health and Human Services, said food deserts contribute to the underlying health conditions that make poor Americans more vulnerable to COVID-19.

"The availability of healthy food is a serious problem because many of these communities constitute what are known as food deserts, the only place that people can buy food or fast food outlets either run by chains or mom and pop type fast foods or corner stores where fruits and vegetables typically aren't stocked. So there's a difficulty, not only in people being able to afford food that we would consider healthy, it's simply not available. All these have a role in the avalanche of obesity that precedes the COVID pandemic and has placed us at risk and is driving the high rates of diabetes and our population." Dr. Bassett said.

Healthcare workers at United Medical Center, the only hospital in Ward 8, say the high number of patients with co-morbidities compounds challenges they face in the emergency room, as a lack of support staff in the medical facility, contributes to the delay in COVID-19 treatment.

"In our population, we have a lot of co-morbidities that are high blood pressure, diabetes, the, you know, cancer, get gunshots. If you don't have the staff to address the number of patients that are coming in at the very best the patient is going to receive a delay in care. At the very worst. The patient will not do so well," said Roberta LeNoir, UMC Unit president for the District of Columbia Nursing Association.

"If you don't have the staff in order to address the number of patients that are coming in at the very best the patient is going to receive a delay in care. At the very worst. The patient will not do so well." she continued.

African Americans, the largest racial group in D.C., make up 46% of the population, according to the U.S. Census, and 77% off all coronavirus deaths in the district, according the D.C department of health.

Black and Latino residents in the poorest pockets of Washington D.C. plead to be seen as the deadly coronavirus pandemic sweeps the area, leaving them with the highest infection rates in the district.

"What does it take for someone to actually come over here to see something like this has happened for so many years, and something needs to be done about it. And we shouldn't have to wait for certain people to move into the community. It should be done for us," Byrd said.

As the number of COVID-19 pandemic surge in the capitol, the pandemic reveals stark disparities in healthcare, COVID-19 testing, and access to food -- problems exacerbating the underlying conditions that leave thousands of low-income residents more vulnerable to the deadly infectious disease.

Residents like Beatrice Evans who have lived in the community for 50 years have seen little change for the better.

"We are always treated like second class citizens, you know, the playing field is not level, never has been and don't like look like it will be," Evans said.

Without access to the internet or computers in her senior living center, Evans said it's difficult for messaging to trickle in during the pandemic.

"That's where the information is coming. We don't get all that opportunity that's out there. The DC government has all the programs -- it doesn't get over here, because no one has a computer.," Evans said.

This report is part of "Pandemic - A Nation Divided," ABC News' special coverage of the heightened racial/ethnic and socioeconomic disparities amid the COVID-19 pandemic. Tune into "Nightline" for the last of a three-day series this week, 12 a.m. ET on ABC.

The Far Southeast Family Strengthening Collaborative is working with local organizations to provide 1,000 free meals a day, in addition to supermarket gift cards for local residents.

"In addition to providing food, we give out masks, we give gloves, cleaning supplies, just to make sure that the home is safe and free from the germs," Bussey-Reede said.

After realizing many residents in DC's poorest neighborhoods were traveling miles to get access to health care and testing, Howard University has opened up a free testing clinic in the area.

The historically black university received private funding from Bank of America to provide a free test to any resident who wants one.

"It may also save a whole lot of lives... You can't treat what you don't know you have," Sherry Freeman told ABC News after receiving a test at the clinic.

The majority of the patients who have tested positive were not showing any symptoms, according to the university, which reports all positive cases back to the Department of Health so the process of contact tracing can begin.

Washington D.C. has partnered with the private sector to attract businesses to Ward 7 and 8 as well as plans for two new hospitals in the area. Still, advocates warn it could come at the cost of rising gentrification and are fearful the disparities will remain.

"They're not going to say this as an opportunity to improve healthcare, to improve healthy food access to improve jobs, to make sure people are no longer living in poverty, they're going to use it as an opportunity to say, Oh, well, those people are just gonna have to die," Wheeler said.
Report a correction or typo
Related topics:
abc newsnational
Copyright © 2020 ABC News Internet Ventures.
More Videos
From CNN Newsource affiliates
TOP STORIES
Newsom to meet with lawmakers about guidelines for how to reopen nail salons

Life after COVID-19: Here's what restaurants, gyms will look like
Fairfield mall opens for 1st time since COVID-19 shutdown
BART reveals 15-step plan to getting service back on track
Mayor: Cop who put knee on George Floyd's neck should be charged
CA moving too quickly to reopen churches and hair salons, Dr. Cody says
Half of Americans would get a COVID-19 vaccine: Poll
Show More
California's unemployment extension program launched Wednesday
US deaths from coronavirus surpass 100,000 milestone
WATCH THURSDAY: 'Education: A Bay Area Conversation'
Get the latest on the novel coronavirus pandemic here
No prom? No problem: 7-year-old holds special event for his nanny
More TOP STORIES News