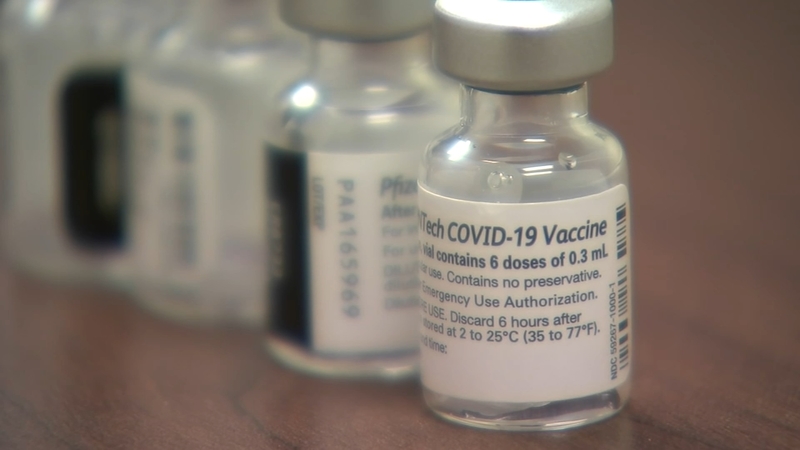 ATLANTA -- More than 100 million people in the U.S. have received at least one dose of a COVID-19 vaccine, the Centers for Disease Control and Prevention reported Friday.

North Dakota has administered the largest percentage of its distributed doses of any state or territory, CDC data shows, followed by Wisconsin. Several southern states, including Arkansas, Mississippi, Georgia and Alabama have some of the lowest percentages of administered doses, followed only by Puerto Rico.

According to the CDC, nearly 58 million people are fully vaccinated against COVID-19, 22.4% of the nation's population over the age of 18. That includes more than half of adults 65 years and older.

The 100 million vaccination milestone followed a welcome announcement from vaccine producer Pfizer on Thursday evening. The company confirmed its COVID-19 vaccine provides effective protection against the virus for at least six months. While modest, the target is better than the previous estimate of 90 days. It also appeared to be protective against the concerning COVID-19 variant that originated in South Africa, B.1.351.

RELATED: Can I still transmit coronavirus after getting COVID vaccine?

However, the news came as cases continue to rise in what some experts are starting to call the virus' fourth wave. According to the CDC, cases have increased over the past 12 days, with cases going up 8.4% compared to the previous week. In 13 states and Puerto Rico, the average percentage of positive tests for the last week has been 6% or higher, with Michigan and South Dakota reporting rates above 11%.

Though the CDC also announced Friday that fully vaccinated people could travel without getting tested or quarantining, CDC director Rochelle Walensky told ABC reporters that the CDC is still advising against non-essential travel.