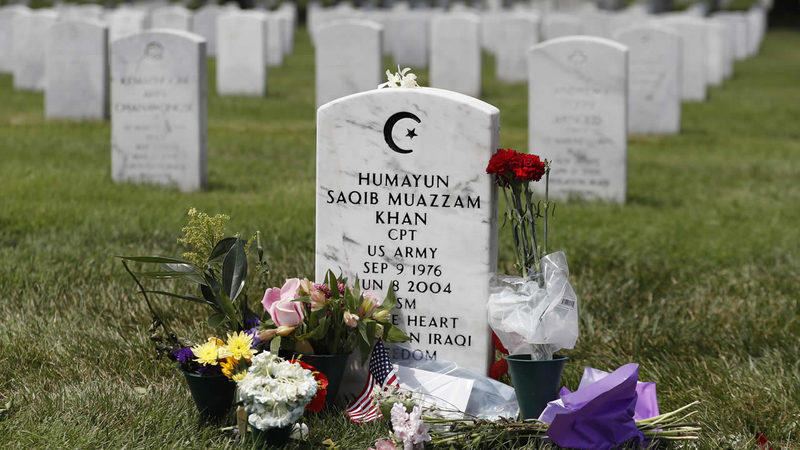 SAN FRANCISCO -- A rising chorus of Republican lawmakers and veterans groups hastened to disavow Donald Trump's repeated criticism of a bereaved military family Monday, but the GOP presidential nominee refused to back down. He complained anew that he had been "viciously attacked" by the parents of a Muslim U.S. Army captain who was killed in Iraq.

Arizona Sen. John McCain, a former prisoner of war, led the charge, saying Trump did not have "unfettered license to defame those who are the best among us." The Veterans of Foreign Wars, the nation's oldest and largest veterans organization, called Trump out of bounds for tangling with Khizr and Ghazala Khan, whose son was killed in 2004.

"Election year or not, the VFW will not tolerate anyone berating a Gold Star family member for exercising his or her right of speech or expression," VFW leader Brian Duffy said.

Democratic President Barack Obama chimed in, too, addressing the Disabled American Veterans in Atlanta. He said of families who have lost family members in the military service: "No one has given more to our freedom and our security than our Gold Star families. ... They represent the very best of our country."

Several other GOP lawmakers also chastised Trump for sparring with the Khans, who appeared at the Democratic convention on behalf of Hillary Clinton. But like McCain, none revoked his support of the GOP nominee in the White House campaign.

In an emotional appearance at last week's convention, Khizr Khan criticized Trump for proposing to temporarily freeze the entry of foreign Muslims into the U.S. and accused him of making no sacrifices for his country. The billionaire businessman challenged that assertion and also implied Ghazala Khan's religion prevented her from speaking. On Monday, he tweeted that "Mr. Khan, who does not know me, viciously attacked me from the stage of the DNC and is now all over T.V. doing the same."

For some of Trump's allies, it was the latest example of a troubling pattern: The real estate mogul frequently continues to hit back at perceived slights or insults, regardless of the political implications. He has stunned rivals with his ability to survive self-created controversies during the GOP primaries, but faces a broader set of voters in the general election.

Indeed, some Republicans said privately that it was the timing of this flare-up that had them on edge- the spectacle of their candidate tangling with a military family just three months before Election Day.

McCain was among several lawmakers - many facing re-election this fall - who distanced themselves from Trump's comments Monday.

Rep. Mike Coffman, a vulnerable Republican in a competitive Colorado district, said Monday he was "deeply offended when Donald Trump fails to honor the sacrifices of all of our brave soldiers who were lost in that war." Missouri Sen. Roy Blunt said the Khans "deserve to be heard and respected."

"My advice to Donald Trump has been and will continue to be to focus on jobs and national security and stop responding to every criticism whether it's from a grieving family or Hillary Clinton," Blunt said in a statement.

Trump advisers have spent months trying to help the political novice do just that, with few signs of progress. Aides say that while Trump often professes to understand the risks of fueling a controversy, he can get drawn back.

"It's just who he is," said Stuart Jolly, a former campaign staffer and current national political director for the pro-Trump Great America PAC.

Newt Gingrich, the former House speaker who has advised Trump, said the candidate's inability to back away from a political land mine "makes him vulnerable. ... He'll have to learn to grow out of it."

While Trump and his allies often blame the media for keeping controversies alive, the businessman himself often fans the flames. After winning the primary, he spent days criticizing a U.S. district court judge's Mexican heritage. He also refused to disavow a campaign tweet about Clinton that appeared to feature the Star of David.

In spite of those firestorms, Trump remains in a close race for the White House with Clinton. And few Democrats appeared ready to declare Trump's criticism of Khan a turning point.

Democratic pollster Paul Maslin said that while "ninety-nine percent of me says this is devastating for Trump," Clinton backers can't assume that another few days of bad headlines will sink a candidate who "simply defies all natural laws of American politics."

The Khans appeared at the Democratic convention Thursday night. The Pakistan-born Khizr Khan told the story of his son, U.S. Army Capt. Humayun Khan, and questioned whether Trump had ever read the Constitution. During the speech, Ghazala Khan stood quietly by his side.

Trump responded in an interview with ABC's "This Week," saying: "If you look at his wife, she was standing there. She had nothing to say. She probably, maybe she wasn't allowed to have anything to say."

Ghazala Khan wrote in Sunday's Washington Post that she did not speak because talking about her son's death remains difficult. "Every day, whenever I pray, I have to pray for him, and I cry," she wrote.

.@realDonaldTrump on general election: "I'm afraid the election's going to be rigged." https://t.co/kWyyUU03lX

.@realDonaldTrump: "Wouldn't it be great if we got along with Russia? Am I wrong in saying that?" https://t.co/uInlYN82U6