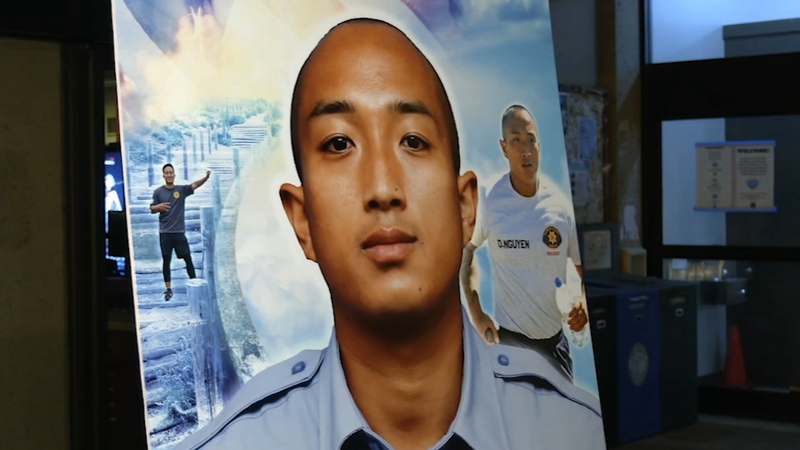 SAN FRANCISCO (KGO) -- Wednesday night the young Alameda County Sheriff's recruit who was killed last month in Oakland was remembered in San Francisco, where he lived and went to college.

A big turnout of family and friends - with special recognition for David Nguyen.

San Francisco Sheriff's Deputies saluting pictures of David Nguyen, a 28-year-old Alameda County Sheriff's recruit who was killed on Interstate 580 in Oakland as he drove home to San Francisco after a day of training.

"Just seeing the community get together for a cause, for my brother, that keeps me going," said David's sister Barbara. She was there to speak along with a number of others, including the San Francisco Sheriff, to honor Nguyen Wednesday night where he was so close to graduating at City College of San Francisco.

Alan Wong is a trustee at City College of San Francisco who served alongside Nguyen in the National Guard.

"With the support of David's teachers, I'm moving forward with a proposal to have City College confer him an honorary degree in liberal arts and sciences to help him and his family complete his academic degree at City College," said Wong.
Nguyen was just one unit away from a degree. His girlfriend Shanice Vaughn read a journal of his where he vowed to do better in school.

The sister of Alameda County Sheriff's Office recruit, David Nguyen, is sharing memories after he was shot and killed on I-580 in Oakland Tuesday.

"My solution is to enter City College with a completely different mindset. The mindset to learn, progress, and most of all not cheat myself out of an education again," said Vaughn.

David's family and friends are still struggling with his loss but were happy to share David's memories on cold city evening, with his mother, who has been hit particularly hard.

Barbara says she will remember the good times.

VIDEO: Alameda Co. Sheriff's recruit fatally shot while driving home from work on I-580 in Oakland

A young Alameda County Sheriff's Office recruit was shot and killed while driving on Interstate 580 Tuesday night, according to ASCO.

"He took care of me at a very young age and he would force me to do everything with him either working out, Boy Scouts, all these things. I didn't really appreciate it when I was younger but when I look back on it now, man he was a great big brother," says Nguyen.

Deputies tell us there is still a $10,000 reward for information leading to the arrest and conviction of David's killer. As of right now, no arrests have been made.