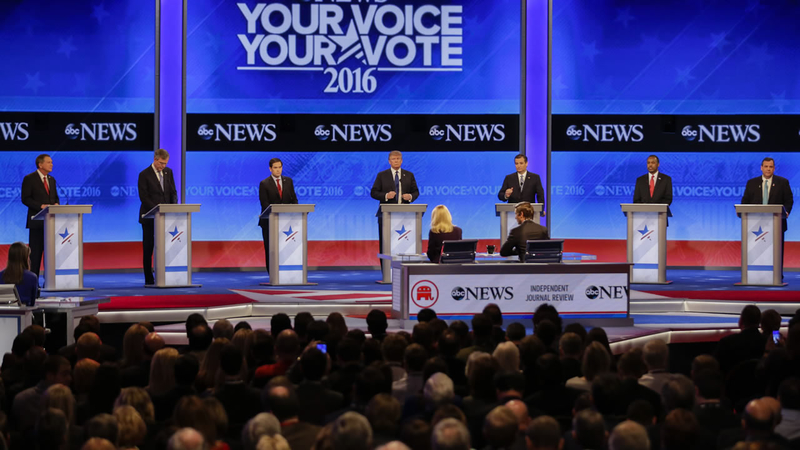 SALEM, New Hampshire -- Eyeing their first wins in a capricious campaign, Republican Donald Trump lashed out at his opponents Monday while Democrat Bernie Sanders sought to play it safe on the eve of the nation's initial primary.

GOP contenders vying for second and third saw fresh hopes for survival after New Hampshire as both parties settled in for a drawn-out slog to the nomination.

As snowfall brought yet more uncertainty to the race's final hours, Hillary Clinton tried to move past talk of a shakeup in her campaign and controversy over comments by supporters that women should feel obliged to vote for her.

Barnstorming New Hampshire with her husband and daughter, she worked to flip Sanders' favored critique against her by claiming that he, too, had taken big bucks from Wall Street - if only indirectly.

But it was Trump, the billionaire businessman, who launched the harshest attacks - not against Texas Sen. Ted Cruz, who had bested him in Iowa, but against Jeb Bush.

The former Florida governor is one of three Republicans hoping Marco Rubio's recent stumbles have opened a fresh path for one of them to emerge as the more mainstream alternative to Trump and Cruz.

"Jeb is having some kind of a breakdown, I think," Trump told CNN, calling Bush, the son and brother of presidents, a spoiled child and an embarrassment to his family. "I think it's a very sad situation that's taking place."

The enmity was mutual. Vying for votes in Nashua, Bush described his opponent variably as a loser, a liar, a whiner and the worst choice for president.

He blasted what he said was Trump's proclivity for "insulting women, castigating Hispanics, ridiculing the disabled and calling American POWs losers."

Still, Trump was running ahead in pre-primary polls, as was Sanders on the Democratic side.

Not so long ago, Republicans saw New Hampshire as the proving ground that would winnow their chockablock field of candidates.

Rubio's surge into third place in Iowa one week ago raised the prospect that voters here would anoint him over Bush, New Jersey Gov. Chris Christie and Ohio Gov. John Kasich.

Yet Rubio faced fresh questions about his readiness - and his ability to defeat the Democratic nominee - after Saturday's debate, when he was mocked for reciting rote talking points about President Barack Obama over and over.

Growing doubts about Rubio seemed to portend a fight for delegates that could extend for weeks or months - to the dismay of Republican Party leaders hoping for a quick consolidation behind anyone but Cruz or Trump.

Democrats are already resigned to the likelihood of a protracted primary following Sanders' strong performance in Iowa.

Rubio insisted his repetitions were part of his plan.

"People said, 'Oh, you said the same thing three or four times,'" Rubio told some 800 people in a school cafeteria in Londonderry. "I'm going to say it again."

Sensing Rubio's vulnerability, nearly everyone seemed to be on the attack.

Bush's campaign debuted a new ad questioning Kasich's conservative credentials, while an outside group backing Rubio pulled an ad attacking Cruz and replaced it with one assailing Bush.

Christie and Bush both piled on Rubio, claiming he hadn't been tested the way that governors have.

All of them filled their calendars with campaign events in South Carolina, the next state to vote, signaling they had no intention of dropping out no matter the verdict in New Hampshire.

In the week since Clinton eked out a win in the leadoff Iowa caucuses, her campaign has worked aggressively to lower expectations for New Hampshire, where Sanders has maintained a sizable lead despite Clinton's victory here eight years ago. Sanders, a Vermont senator, is well known to voters in neighboring New Hampshire.

Clinton was shouldering renewed troubles amid talk of a possible campaign reshuffling. Although campaign manager Robby Mook is expected to stay, some Clinton allies have said new advisers may be brought in after Tuesday.

The former first lady insisted it was all overblown.

"I have no idea what they're talking about or who they are talking to," Clinton said on MSNBC. "We're going to take stock, but it's going to be the campaign that I've got."

Sanders, wary of upsetting a race trending his way, stuck to core campaign themes as he addressed cheering supporters in Nashua.

Yet Sanders passed up all that on Monday, instead telling supporters in Nashua, "We have come a long way in the last nine months."

But his campaign did take issue with Clinton's claim that Sanders benefited from Wall Street money donated to Senate Democrats' campaign arm, with campaign manager Jeff Weaver arguing it "suggests the kind of disarray that the Clinton campaign finds itself in today."