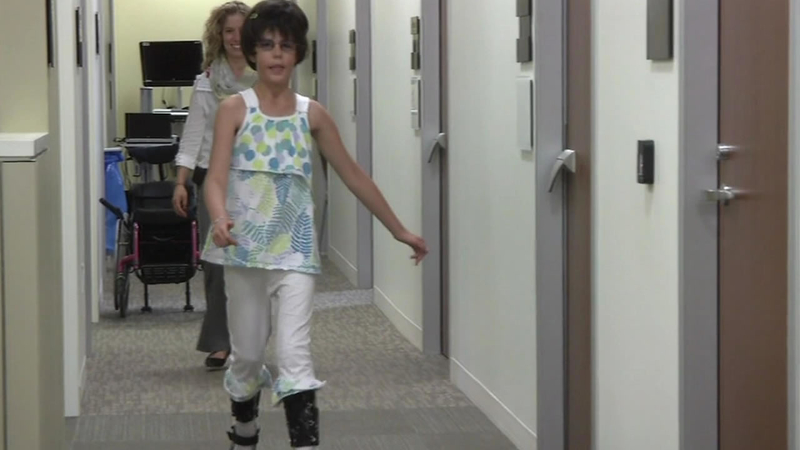 PALO ALTO, Calif. (KGO) -- For 9-year-old Kayla, a recent ride on a surfboard at a special program in Santa Cruz, was something of a miracle. Born with a neuromuscular condition called Myotonic Dystrophy, Kayla has struggled just to walk and develop normal muscle function. Her mom, Lisa Harvey says the fight began just moments after her birth.

"You know, they actually said you can choose to pull life support and I was devastated. And I said, 'We don't even know what this is, let's fight and see what we're dealing with first,'" Harvey remembers.

Kayla's progress is being tracked at a unique clinic at Stanford Hospital. It's set up to study and treat congenital diseases that may stretch back generations. In Kayla's case it's at least three generations, including her mom and grandma, Jane Harvey. Clinic director Dr. John Day says treating the family together allows researchers to better gauge the effectiveness of new therapies.

"If everybody is receiving a different treatment, then when we start to introduce a new treatment modality, it's not going to be clear if it's working," says Day.

Like many genetic diseases, symptoms of Myotonic Dystrophy can vary between generations. Kayla shows the most pronounced symptoms, followed by her grandmother Jane, whose twin sister died from the disease. She's hoping the information gleaned at the Stanford clinic will help the entire family.

"We may be part of the generation that is able to find the cure," Jane hopes.

Day says one promising new therapy is now set for clinical trial later this year. It uses genetic engineering to target the gene responsible for causing the disease.

"It's a very small genetically programmed bullet that goes right where you want it to and knocks out the problem," explains Day.

"If we can identify family members early on, then we can actually, begin working with them to hopefully prevent or at least delay the onset," he says.

For Kayla's mom Lisa, the clinic is allowing her family to fight the disease together, and look forward to the day the Kayla is cured, and chasing her dreams.

"To see her on that surfboard, she's a remarkable kid," says Lisa.

Both Kayla and her grandmother are expecting to participate in the clinical trial when it begins later this year.