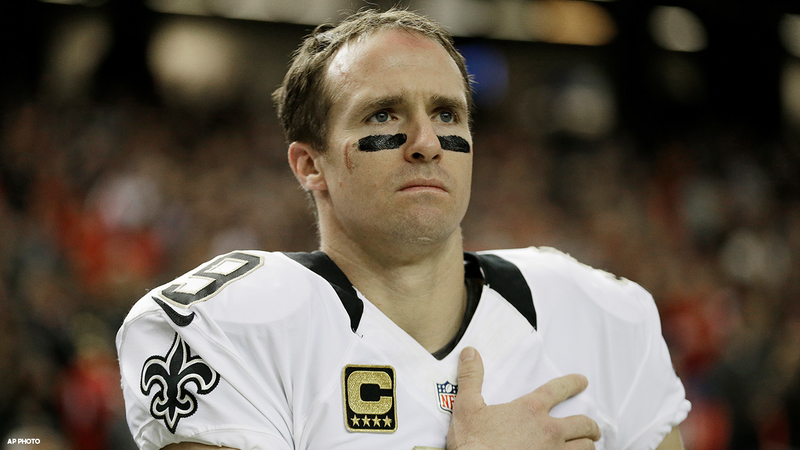 Drew Brees says he doesn't agree with 'disrespecting the flag'

NEW ORLEANS, Louisiana -- Drew Brees was sharply criticized by fellow high-profile athletes, including some of his own teammates, on Wednesday after the Saints quarterback reiterated his opposition to kneeling during the national anthem.

In an interview with Yahoo, Brees was asked to revisit former NFL quarterback Colin Kaepernick's 2016 protest of police brutality against minorities, in which Kaepernick knelt during the national anthem before games.

"I will never agree with anybody disrespecting the flag of the United States," Brees began, adding that the national anthem reminds him of his grandfathers, who served in the armed forces during World War II. "In many cases, it brings me to tears thinking about all that has been sacrificed, and not just in the military, but for that matter, those throughout the civil rights movements of the '60s, and all that has been endured by so many people up until this point."

Jenkins was Brees' teammate when the Saints won the Super Bowl in the 2009 season, but spent the past six seasons with the Philadelphia Eagles before returning to New Orleans this offseason.

Brees has said he supports those protesting police brutality but that he does not see the national anthem as the proper forum for that. In 2017, Brees participated with teammates who knelt before the national anthem, but then stood in unison when the anthem was played.

Brees issued an apology on social media on Thursday, stating he was heartbroken to hear his words hurt others.

"In an attempt to talk about respect, unity, and solidarity centered around the American flag and the national anthem, I made comments that were insensitive and completely missed the mark on the issues we are facing right now as a country," Brees wrote. "They lacked awareness and any type of compassion or empathy. Instead, those words have become divisive and hurtful and have misled people into believing that somehow I am an enemy. This could not be further from the truth, and is not an accurate reflection of my heart or my character."

Brees went on to say he stands with the black community in the fight against systemic racial injustice and police brutality.

"I will never know what it's like to be a black man or raise black children in America but I will work every day to put myself in those shoes and fight for what is right," he said. "I have ALWAYS been an ally, never an enemy."