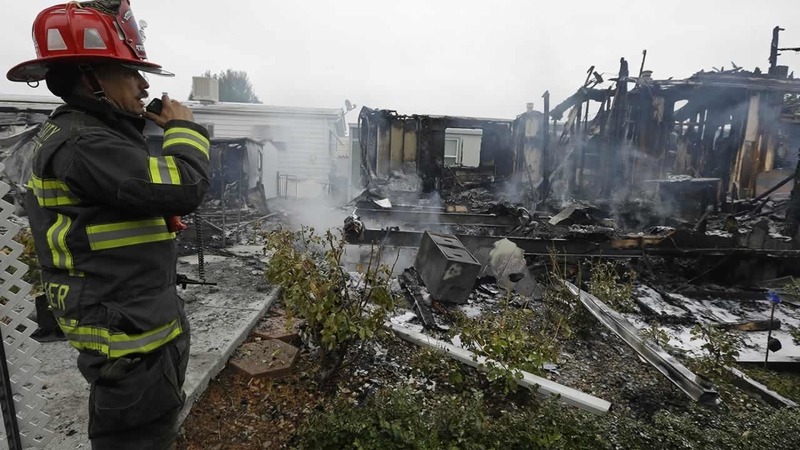 NAPA, Calif. (KGO) -- All residents are accounted for and no injuries were reported following a fire that destroyed four mobile homes on Orchard Ave. in Napa after a 6.0 quake hit early Sunday morning.

Officials believe the fires were due to gas line breaks that happened in the immediate aftermath of the quake. The fires were complicated by water main breaks in the same area. When crews first arrived on scene, they had no water pressure.

"Unfortunately we did have a major water main break just outside the mobile home park, which really complicated the fire fight," Napa Division Fire Chief Darren Drake said. "We ended up having to get some water tenders in to provide some water to the fire engines for the fire fight. So it did certainly make things a bit more difficult for us.

He went on to say, "When we first got here, that water main had already broken and our hydrants weren't operating. We do carry tank water on the fire engines, so we have 500 gallons. And that was to stop the spread of the fire, protect those structures that were not yet involved, and that was our plan, to begin to cordon off the fire and fortunately we were able to stop it where it was."

The fire department says they are thankful there wasn't a lot of wind because at that point, without any water, they were concerned that the fires could spread throughout the entire community.

"I walked out of my back door and saw the house behind me on fire," resident Frank Jones said. "Unfortunately the earthquake knocked out several water mains and when the fire department arrived they had no water pressure. We do have two swimming pools here in the community. They were able to siphon water out of the pool into their trucks and come back several times to fight the fire behind my house."

Fortunately crews were able to access that water. But it was about 15 to 20 minutes before they were able to get their own water tenders in there to really put water on the fires.