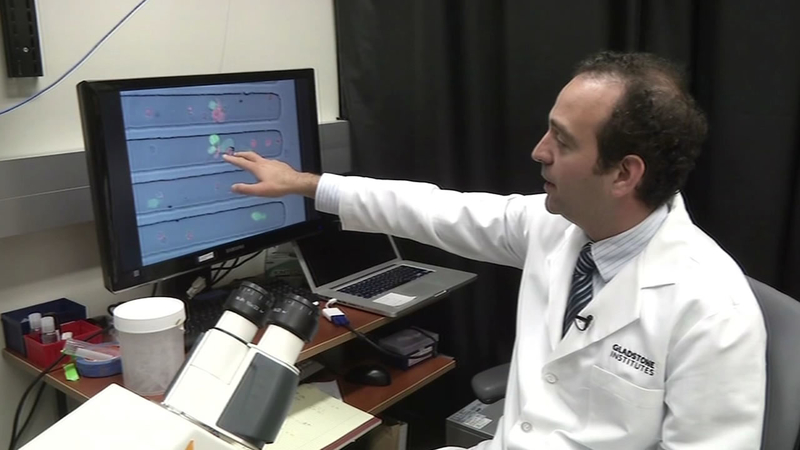 SAN FRANCISCO (KGO) -- Ebola antibodies are proving to be the most effective treatment against the Ebola virus. They've helped save two recent patients. ABC7 News takes a look at how it works and at the challenges of developing new treatments.

In his lab at the Gladstone Institutes, Leor Weinberger, Ph.D., investigates novel ways to attack the virus' such as HIV. However, for the time being, he believes the fastest way to treat current Ebola patients will most likely be with an older, but proven method called convalescent serum.

"The convalescent serum approach is taking blood from patients who are recovered or are recovering from the disease, in this case Ebola, and isolating the serum from that whole blood," Weinberger explains.

He says a more sophisticated version of that process is the basis of an experimental Ebola drug called Zmapp. The drug appeared to cure two American health care workers who were rushed from West Africa to Atlanta earlier this year. But the challenge is that it's in short supply and involves culturing antibodies using live mice, then processing them in tobacco plants.

"The process of purifying those antibodies and creating them de novo in model systems like plants is time consuming, expensive and slow," he believes.

In the meantime, potential vaccines to guard patients against Ebola could also be on the horizon. At least one has already proven effective in primates. But the path to approval of the drug in humans includes concerns about safety.

Researchers say the most effective versions involve using live virus genetically altered to carry specific proteins from Ebola to stimulate the immune system. Since the virus replicates, some worry they could theoretically mutate to a dangerous form. Still, Weinberger points to the success of common polio vaccines, which are made from weakened, but still living versions of that virus.

"Oral polio vaccine was a vaccine that just eradicated polio six months ago in India," he says. "It was just announced."

Ultimately, he believes the Ebola crisis should be a wake-up call for research teams around the world to develop a broad new range of anti-viral agents, not just for Ebola, but other emerging threats.

The serum strategy was used in Ziare during an Ebola outbreak in the 1990s. Seven of the eight patients given the treatment survived.