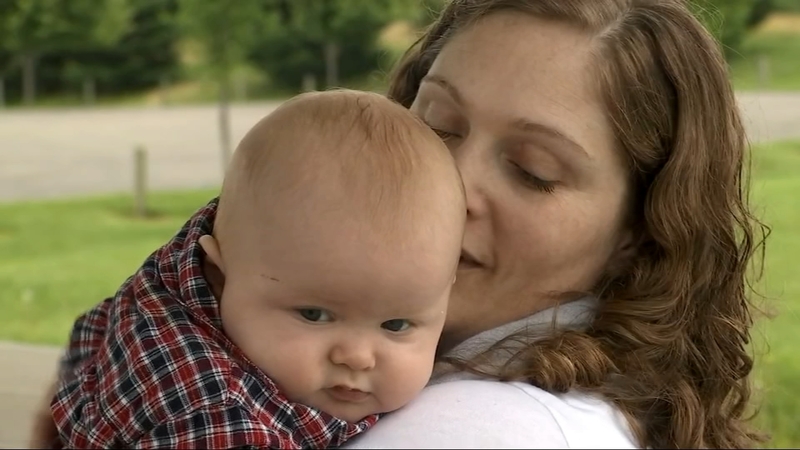 'Miracle' baby born after mom had her fallopian tubes removed

KEARNEY, Missouri -- Elizabeth Kough, a mom of four, said she hugs her newborn son, Benjamin, "a little tighter" because of the miraculous way he came into this world.

Kough, 39, is still also in shock that she has four children.

Nearly four years ago, she had both of her fallopian tubes removed in a procedure known as a bilateral salpingectomy. The removal of the tubes, which allow eggs to travel from the ovaries to the uterus, is typically a nearly 100 percent effective form of contraception.

In addition to preventing pregnancy, removing one's fallopian tubes has also been shown in some studies to reduce the risk of certain types of ovarian cancer, an added benefit that appealed to Kough because she has a family risk of the disease.

BIG BUNDLE OF JOY: "I knew she was gonna be big, but I didn't anticipate no 15 pound baby."

"I also hit age 35 and they medically say at that age pregnancy becomes more high-risk," Kough told "Good Morning America." "I was also divorced and single and had three children, which is quite a blessing for a family, but I thought that was probably enough."

Kough had the procedure done by her OB-GYN in Virginia, where she lived at the time.

Around three years later, Kough was living in Missouri, in a relationship and oddly, she thought, experiencing pregnancy symptoms.

"I had read that if I did become pregnant after this procedure there's a higher risk of an ectopic pregnancy, which can be dangerous," she said, referring to a pregnancy in which the fertilized egg attaches itself in a place other than inside the uterus. "I thought it wouldn't hurt to just take the test and I really didn't think it would be positive."

When the home pregnancy test rang positive, Kough was shocked and went immediately with her boyfriend to a local hospital, which also confirmed her pregnancy at first with a blood test and then an ultrasound.

Kough's doctors were as surprised by her pregnancy as she was.

"I've delivered and participated in thousands of deliveries in the course of my 10-year career and this is the first of a case like this that I've seen," said Dr. Dawn Heizman, a board-certified OB-GYN at Meritas Health. "None of us have encountered this before."

The complete removal of Kough's fallopian tubes was confirmed by her medical records, including a pathology report, according to Heizman.

Doctors also confirmed that Kough did not get pregnant through in-vitro fertilization, typically the only way a woman who has had her fallopian tubes removed becomes pregnant.

"We know that eggs can travel in the abdominal cavity and get into the uterus," Heizman said. "In Elizabeth's case, it's so rare because she has no tube to pick the egg up."

A first-time mother got the surprise of a lifetime when her deployed husband surprised her live on television and met his infant daughter for the very first time.

The most likely theory for Kough's pregnancy is that an egg migrated to one of the cornu of the uterus, near where the fallopian tube would have been attached, and entered via a small fistula tract to end up as an intrauterine pregnancy.

"It's all in theory and you can't even prove it, but obviously something happened," she said. "An egg made it to the uterus and got fertilized."

Adding to Kough's medical miracle is that all of this happened when she was 38 years old, well past 35, the age at which doctors start to consider women as being of advanced maternal age, according to Heizman.

While doctors, including Heizman, dealt with the medical wonder of it all, Kough dealt with the emotions of an unexpected but ultimately very well-received pregnancy.

"It was mostly reconciling what I thought was going to happen in my future with what was happening," said Kough, whose older kids are ages 17, 11 and 9. "I really love my kids and I really love my boyfriend so after the initial shock and an understanding that my life was going to be very different, I was really, really happy."

Nurse adopts baby who had no visitors for months-long hospital stay.

Kough said she also realized how lucky she was, recalling, "After I first found out I was pregnant I bought so many lottery tickets because I thought, 'I'm so lucky.'"

Kough had a smooth, albeit high-risk pregnancy, and gave birth to Benjamin on March 14 at North Kansas City Hospital. He arrived via C-section as a healthy, 7-pound, 6-ounce baby.
"The doctor peeked around the curtain and said my fallopian tubes weren't there and confirmed again the bilateral salpingectomy surgery had been a success," Kough recalled. "She also said I need to use another form of birth control."

Heizman believes Kough's case is one that will go in medical literature. She has only found three other instances in medical data of pregnancies after double fallopian tube removals, and none of those pregnancies resulted in a healthy and viable baby.

"The fact that Elizabeth delivered a healthy boy with all of these very rare circumstances, it's like a miracle," Heizman said. "This was impressive."

And after such a dramatic entry into the world, Benjamin's life is now fairly normal, according to Kough, who is back at work while her boyfriend is a stay-at-home dad to Benjamin.

"I don't want to spoil him too much so I don't call him a miracle, but my youngest calls him my 'angel baby,'" she said. "When I look at him I feel really blessed to have him because I know the chances of him being here are just so slim."