KGO
SAN FRANCISCO (KGO) -- The Match Game TV show has been on and off the air for more than fifty years. The latest version is running Wednesday nights at 10 pm on ABC7, but that's just the tip of the Match Game iceberg.

The show has lived on through the internet where some old episodes have hundreds of thousands of views, along with a wide range of parodies.

Now that the Match Game is back on TV, it's just like old times, with spoofs of the show up and running too. A live version of the Match Game featuring six drag queens is making the rounds at various San Francisco bars. We checked out a performance at the iconic Stud Bar.

The show's co-producer, named Profundity, says the city is a "performance drag mecca" and the Match Game fits the formula perfectly.

Contestants fill in the blanks of funny phrases, hoping to match what the drag queens say. The phrases are generally filled with double entendre - and the drag version is definitely adults only, with lots of obscenity.

Host Chris Sams has been a Match Game fan his whole life. "I used to skip school to watch game shows at home" he remembers.

Co-producer Sugah Betes says the idea for the Match Game in drag started fifteen years ago during a party. " Drag queens pride themselves on being funny or witty, some more cutting than others, but it plays into our campy, sassy style."

The audience really gets into it, and according to Sugah Betes, the performers love it too. She says many other drag queens are asking to do the show, and she adds "hopefully we get to do it over and over and over again."

The next Match Game drag show is February 16th at The Edge in San Francisco's Castro district. 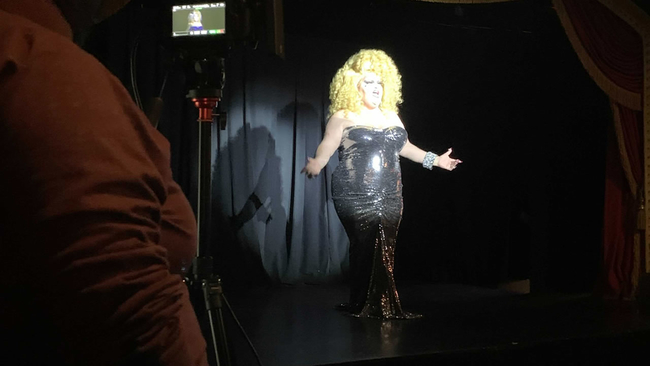