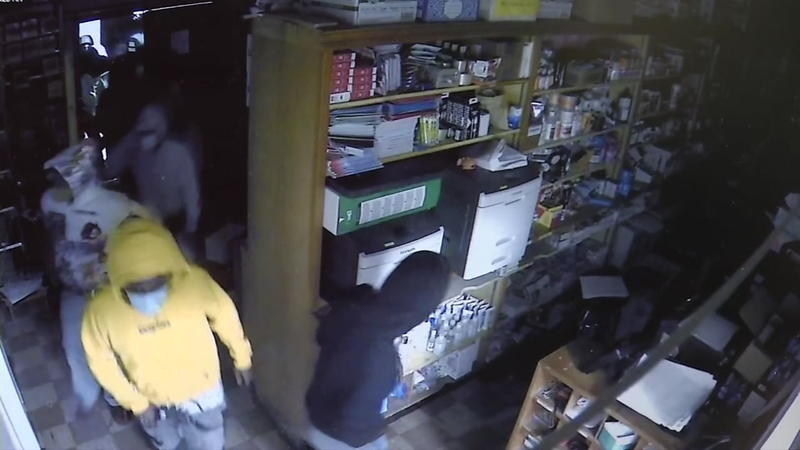 OAKLAND, Calif. (KGO) -- Police in Oakland and other East Bay cities have been dealing with a rash of brazen robberies and other incidents since Tuesday night.

Among those businesses hit, was Oakland's longtime High Street Pharmacy.

It started with a blow torch at the back door of the 73-year-old pharmacy, as seen on the store's surveillance cameras. Several men show up just after 10:30 p.m., cut their way through a metal back door and then the marathon begins.

For five hours, until after 3:30 in the morning, dozens of people run into the pharmacy, smashing computers, wrecking displays, stealing drugs and other merchandise and ransacking a business that has served Oakland's Laurel District since 1947.

"We feel like we deserve a little bit better," said owner Gareen Avakian, who told us she's heard from neighbors who called 911 almost as soon as the brazen break-in began. An alarm company also apparently tried to call, but Oakland police didn't respond for five hours.

"It's just disturbing to think that there's nobody here looking out for us in this community," said Avakian. "This is an important store, an essential store that helps out a lot of people."

The looting and destruction were all captured in vivid color by the store's many surveillance cameras. The images are so clear, investigators could potentially identify suspects, but so far the police have yet to even ask for it.

Once they get the video, an Oakland police spokesperson told ABC7 News they will see if there's a possible connection to this week's rash of armed robberies at Oakland cannabis businesses.

Oakland police responded to several reports of looting overnight, including at a cannabis club where the owner says $100,000 of product and cash was stolen.

As for their late arrival, with limited resources, a call like the High Street looting doesn't always get top priority.

"On the night of the election, we were dealing with armed robbers who were targeting businesses. We were also dealing with an officer-involved shooting," explained Oakland Police Spokesperson Fecilia Aisthorpe. "So if we have priority calls where someone's life is in danger, that's going to take priority over a business being burglarized or vandalized."

"I don't know, perhaps they were spread too thin," said Avakian. "There just doesn't seem to be the communication or ultimately the action taken so that the community has the protection they need."

Although the looting occurred on election night there has been no confirmation that the two events are connected.