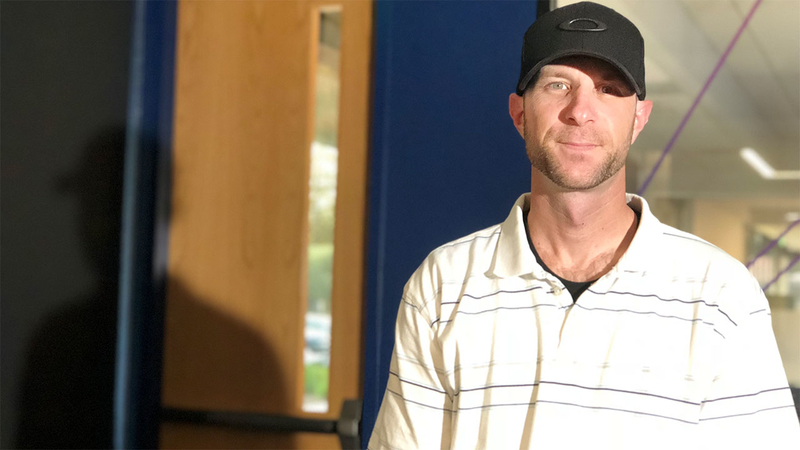 SAN JOSE, Calif. (KGO) -- The UPS driver held hostage during the Valentine's Day hijacking, police chase and deadly standoff in San Jose is breaking his silence. It's a story you'll only see on ABC7 News.

On Feb. 14, Mitch Ellerd was filling in for another UPS driver who was on vacation. Ellerd was at work, ahead of schedule, and on the phone with his wife and two kids. The family was discussing Valentine's Day cards for dad.

"All I had left was that little area in Communications Hill," Ellerd said. "And that's when I met them."

He was referring to suspects Joanna Mae Macy-Rogers and Mark Morasky.

Ellerd continued, "They were very direct, like there was going to be an issue. So I just said 'You know what, guy?' I just turned and I said, 'You know what? Just take the truck.' When I turned back, there it was, right in my face." A gun carried by Morasky.

The hijacking and hostage taking began. As Ellerd jumped behind the wheel, he heard sirens. He noticed the sound, inching closer.

He learned later that the San Jose Police Department was monitoring from the sky.

EXCLUSIVE: UPS driver taken hostage in SJ was covering for coworker on vacation

Ellerd was then forced onto Northbound 87. The move brought Ellerd the first moment he thought to bail.

"When I started to make the right hand turn to get onto the freeway, I was going to jump out of the truck," he said. "When I started making the turn, I had reached over with my left hand and I was trying to unbuckle my seat belt. Well, he caught me, and he got pretty upset. Very upset."

Ellerd continued driving. From that point on, Morasky kept a grip on Ellerd's seat belt. Behind the UPS truck was a sea of patrol cars.

"When I saw that many officers behind me, it was kind of like, I'm in trouble," Ellerd admitted. "Because I figured this guy did something pretty bad."

His only thought, keep driving.

"I figured as long as we were driving, we're okay. We're okay for now," Ellerd said.

Ellerd said the scene surrounding the truck was like something straight out of the movies.

"But when you're in the driver's seat and you're the one who's driving away from them, it's uncomfortable," he told ABC7 News.

Ellerd stayed under 50 miles per hour and purposely hit spike strips near 87 and Taylor Street.

Minutes later and miles away, the truck came to a stop at North 1st Street and Trimble Road in North San Jose.

It was there that Macy-Rogers surrendered, leaving the two men inside the truck.

Although little was said between the two men, Morasky admitted he had nothing to lose.

"He was just crying. He was bawling, and I was just sitting there quietly," Ellerd said. "He just randomly asked me, he goes, 'Can I show you a picture of my daughter?' And I said, 'Yeah, absolutely.'"

Ellerd's release came shortly after one last exchange, "I said, 'Can I show you a picture of my daughter?'"