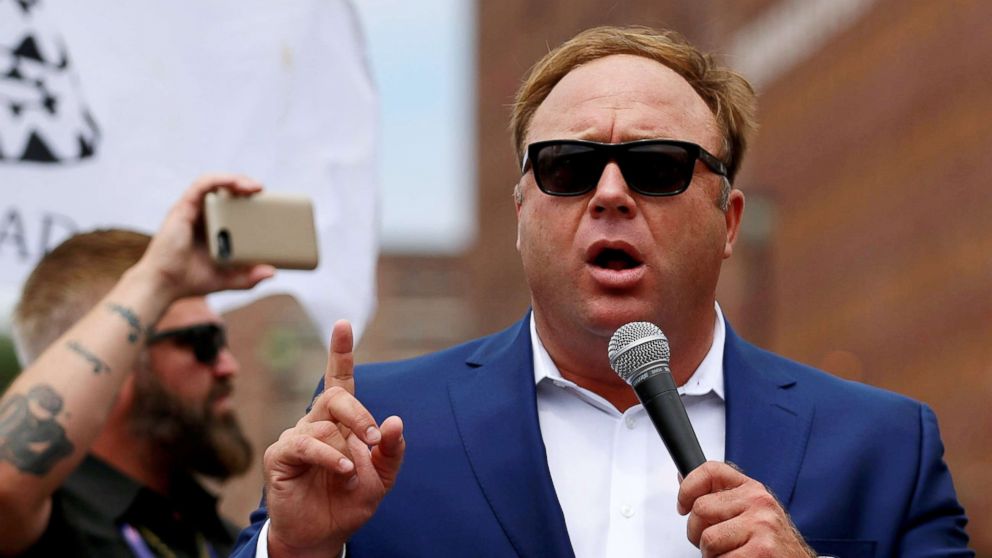 Facebook on Monday announced that it took down four pages belonging to rightwing conspiracy theorist Alex Jones, including his "Infowars" radio show, citing violations of the platform's hate speech and bullying policies.

It is the latest effort by social media giants and the tech industry to try and crack down on speech deemed offensive.

Facebook said in a statement obtained by ABC News on Monday that it also suspended Jones' account for 30 days and that it "unpublished" the pages because they have repeatedly posted content "glorifying violence, which violates our graphic violence policy, and using dehumanizing language to describe people who are transgender, Muslims and immigrants, which violates our hate speech policies."

The media giant said that it removed the Alex Jones Channel Page, the Alex Jones Page, the InfoWars Page and the Infowars Nightly News Page due to repeated violations of the company's terms of use.

"We've been banned completely on Facebook, Apple, & Spotify. What conservative news outlet will be next? The one platform that they CAN'T ban and will ALWAYS have our live streams is infowars.com/show," Jones, who remains active on Twitter, tweeted on Monday, slamming what he referred to as "censorship."

ABC News has reached out to Jones but a request for comment were not immediately returned.

Twitter told ABC News on Monday that Jones is currently not in violation of the company's policies.

Texas Sen. Ted Cruz said that although he is "no fan" of Jones, "Free speech includes views you disagree with."

"Am no fan of Jones - among other things he has a habit of repeatedly slandering my Dad by falsely and absurdly accusing him of killing JFK - but who the hell made Facebook the arbiter of political speech? Free speech includes views you disagree with," he tweeted Monday.

YouTube, which is owned by Google, issued a strike against Jones in July and removed four of his videos, removed top channels associated with InfoWars on Monday, including The Alex Jones Channel, which has nearly 2.5 million subscribers. Two of the videos contained anti-Muslim speech and another showed a man pushing a child to the ground.

"All users agree to comply with our Terms of Service and Community Guidelines when they sign up to use YouTube," a YouTube spokesperson told ABC News on Monday. "When users violate these policies repeatedly, like our policies against hate speech and harassment or our terms prohibiting circumvention of our enforcement measures, we terminate their accounts."

Jones also targeted the survivors of the Parkland, Florida, school shooting that left 17 dead and called activist and shooting survivor David Hogg a "crisis actor" in a video that was later taken down by YouTube. Jones later claimed that Hogg has been given lines by anti-gun advocates.

Apple also removed the majority of Infowars' podcasts from its iTunes and Podcast apps, citing violations of hate speech guidelines.

"Apple does not tolerate hate speech, and we have clear guidelines that creators and developers must follow to ensure we provide a safe environment for all of our users," an Apple spokesperson told ABC News. "Podcasts that violate these guidelines are removed from our directory making them no longer searchable or available for download or streaming. We believe in representing a wide range of views, so long as people are respectful to those with differing opinions."

And last week Spotify, the music streaming service, said on Wednesday that it has removed some episodes of "The Alex Jones Show" podcast, which airs on Inforwars, for violating its "hate content policy," following backlash on social media.

"We take reports of hate content seriously and review any podcast episode or song that is flagged by our community," a Spotify spokesperson told ABC News on Monday. "Due to repeated violations of Spotify's prohibited content policies, The Alex Jones Show has lost access to the Spotify platform."

"I was born in censorship. I was born being suppressed," he said on his radio show, responding to Spotify's move.

Among other conspiracy theories, Jones has called the 2012 Sandy Hook Elementary School mass shooting a hoax.

Six families of victims killed in the shooting, as well as an FBI agent who responded to the scene, filed a defamation lawsuit against Jones in May after he repeatedly called the shooting fake on "Infowars." The lawusit was filed in Travis County, Texas, where Jones' media company is based.

On Wednesday Jones' attorneys argued that the "Infowars" host didn't defame one victim's parents who say they've been tormented by his followers and forced to move seven times. Jones was not present at the hearing.