KGO
By Liz Kreutz
SAN FRANCISCO (KGO) -- Marrissa Dorough fought through tears as she told ABC7 about the worst night of her life.

She had just woken up around 9:30 p.m. to get ready for her overnight shift when she heard about a distant fire. It didn't seem too urgent, but had prompted a livestock evacuation warning, so she called out of work and drove up to her friend's property outside of Vacaville, where she kept her six horses, to begin boarding them up in her trailer.

What no one realized was just how fast this fire would take a turn. Within minutes of arriving at the property, the wildfire could be seen glowing from the ridge above them. Before they knew it, fire was everywhere.

Despite every effort by Dorough and her friends, the fire was too much. She learned the next morning five of her six horses had perished from the flames.

"I feel like a lot of my life and identity has just been gone," a devastated Dorough told ABC7 News. "Like everything I do, I do for these horses."

Stories are still emerging of how absolutely terrifying that night was. The horse seen in this video was, sadly, the only horse of six that survived.

Rob Ludden lives on the property where Dorough kept her horses. His brother Colton and sister-in-law, Kelsey, live there, too. He described their evacuation as a "non-stop night of chaos."

"Within seconds, the fire was literally upon us," Ludden said. "I remember seeing an image coming around Colton's house, and running around the corner with animals in tow and flames just shooting behind and over our heads, and we just got in our cars and took off as fast as we could."

Ludden captured dramatic videos on his cell phone throughout the night, including of what appeared to be a fire tornado burning near their property. He said he saw several of them, including one that picked up and destroyed a four stall horse shelter that had been anchored into the ground. They found debris from the shelter a half mile away.

This is video from the #LNULightningComplex #HennesseyFire as it spread rapidly through the outskirts of #Vacaville on Tuesday night/Wednesday morning.

Rob Ludden recorded what appears to be a fire tornado as he tried to save his property. pic.twitter.com/46WCEQD3ZA

"I've seen wildfire all my life. I'm 36-years-old. I've lived in California all my life," he said. "But seeing fires like this, when there's walls of fire coming at you, and fires spotting 500 to 1,000 feet in front of us, just constantly spreading out all over the valley that quickly. I had never seen fire move like that before."

It was Ludden who first discovered Dorough's horses. He said a few of them died inside a burning home that they ran into during the chaos. Another one they found was so badly burned his neighbor had to euthanize it. They also found his sister Kelsey's pony and, sadly, had to do the same.

"It's just heartbreaking," Ludden said. "We put it down. We did the humane thing."

There was one surviving horse: Ava.

This is the Ava, the sole surviving horse. She was so badly burned that they thought they would have to euthanize her.

"But she is a fighter," her owner Marrissa Dorough told us, "And she proved that she wanted to keep living."

When Ludden saw her, burned and scared, he called Dorough who called a vet and together they were able to save her.

This image shows Ava, a horse injured in the LNU Lightning Complex Fire in August 2020. She is now being treated at UC Davis.

"She had to walk down just a huge hill just burned to a crisp, and she was breathing really hard," Dorough recalled through tears. "And we had made the call that we were going to put her down on the spot, but she is a fighter and she proved that she wanted to keep living."

They brought Ava to UC Davis Veterinary School of Medicine where she is currently being treated with severe injuries. Dorough said she is improving and, while she will need at least a year of rehabilitation, she is expected to survive.

As Dorough grieves the loss of her other beloved animals, Ludden, who lost his home, says he is also frustrated. He feels they should have been given better warning to get out.

"We really had no notice for what was going on, and this is the thing that makes me incredibly angry," he said. "I mean, how is it that today in 2020 with all the technology, all the resources we have, that we knew nothing about this fire, we had no idea how dangerous it was?"

Ludden said he had not signed up for Nixle alerts yet because he had only moved into the property this summer. His brother does get alerts, but he said he didn't get an official text to evacuate until the fire was minutes away.

"Why is it that I can get an Amber Alert to my phone at 2 a.m. of a kid that goes missing in San Diego and I live 600 miles away? Why didn't I get a notification of that sort?" he asked.

Ludden, Dorough and Kelsey James all have fundraisers to help them get back on their feet, pay for the costs of their losses and animal rehabilitation. Links can be found here, here and here.

"This is my new passion in life, is getting this solved," he added, "Because people can't keep going through this. We're better than this." 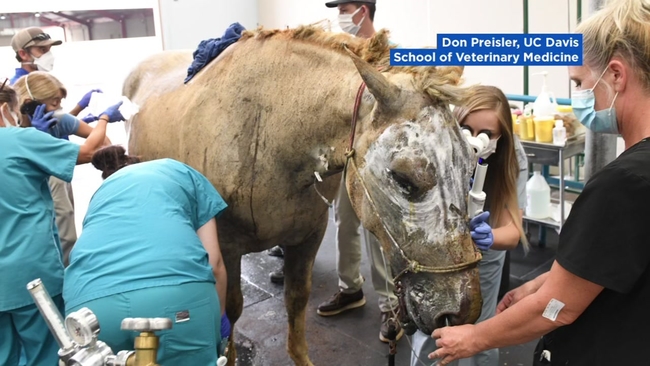