San Francisco cracking down on illegal vendors at Fisherman's Wharf 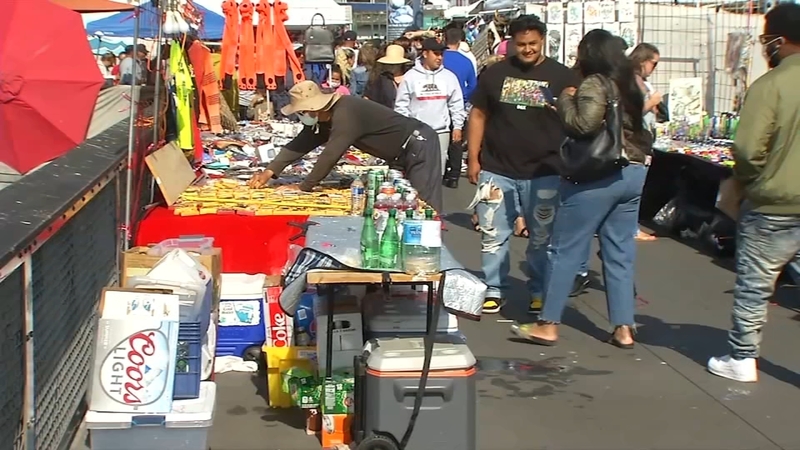 SF cracking down on illegal vendors at Fisherman's Wharf

SAN FRANCISCO (KGO) -- There are concerns about a growing outdoor market at Fisherman's Wharf with vendors selling goods, food and in some cases alcohol, without any regulation.

Bacon-wrapped hotdogs stored in a cardboard box under a shrub is just some of what Taylor Safford says he's seen lately around the wharf.

"There's no refrigeration for any of the foods that they're selling, hot dogs are out all day long, there's no handwashing stations, alcohol is being served without ID checks," said Safford.

Safford is President and CEO of Pier 39.

"During the pandemic last year it kind of exploded," he said.

The problem is especially troubling for Bob Partrite who is Chief Operating Officer of Simco Restaurants. Simco has five restaurants, two carts and a coffee shop on the pier.

"We are paying all of our taxes, permitting fees and licensing fees and we get inspected by the health department or local organizations and these people come and set up shop and are able to sell without having any of the things a business is supposed to have," said Partrite.

Rodney Fong is President and CEO of the San Francisco Chamber of Commerce.

"When illegal vendors come out and pop up right in front of these brick and mortar businesses who are paying rent, paying insurance, it's very difficult," said Fong.

San Francisco Supervisor Aaron Peskin has been working with businesses to find a solution.

"To create licensed vending that can be regulated, can be fair, can be healthy and safe," said Safford.

In an emailed statement to ABC7 News, Supervisor Peskin writes, "San Francisco's waterfront is an iconic destination for residents and tourists, so it's no surprise that it has attracted its share of entrepreneurial vendors as well. The Port's Vendor Program brings us into compliance with state law while restoring the City's ability to ensure the highest standards for public health and safety. Along with funding for culturally-sensitive outreach in the last budget cycle, we've created a model for the rest of the city to follow."

ABC7 News reached out to the California Department of Alcoholic Beverage Control and the San Francisco Department of Public Health.

"Yes, ABC is aware of allegations that vendors in the area of Fisherman's Wharf have been selling alcohol to minors. The San Francisco Police Department is aware as well. These vendors are not licensed by ABC, however, ABC agents have written more than one misdemeanor criminal citation during the past few months in response to public complaints. I do not currently have the specific number of citations that have been written. Additionally, ABC recently received new complaints of illegal sales to minors and the department will be taking appropriate action to investigate those. Since these vendors are not licensed by ABC, the department does not have authority to discipline these business. The individuals who were cited were selling beverages from a cart or an easy-up stand and they did not have an ABC license. ABC forwards any misdemeanor criminal citations to local District Attorneys for possible prosecution. Any punishment would be determined through the criminal justice system. We encourage the public to let us know if they see potential sales of alcohol to minors. Protecting youth is an enforcement priority."

"Similar to many major cities across the country, mobile food facilities such as pushcarts and trucks have increasingly become a feature of the San Francisco streetscape. The San Francisco Department of Public Health (SFDPH) values health and food safety and works to ensure that the public is consuming safe food from a permitted vendor. Although we are not able to immediately verify individual instances of real-time violations, we do have systems in place to ensure reporting and follow up. Additionally, SFSPH has well-established rules for permitted vendors to ensure safe and sanitary operations. Over the past year, we have worked with the Port of San Francisco and the Department of Public Works to provide vendors in the Fisherman's Wharf area with information on how to keep food safe, obtain permits for approved food sales, and how comply to with current regulations. When necessary, we have also given warnings to unpermitted vendors following enforcement operations. Consumers should lookout for a permit decal or sticker visible on the food cart or mobile vehicle to ensure the vendors are following regulations on food temperature and storage, hand hygiene and washing, as well as proper food handling and preparation."