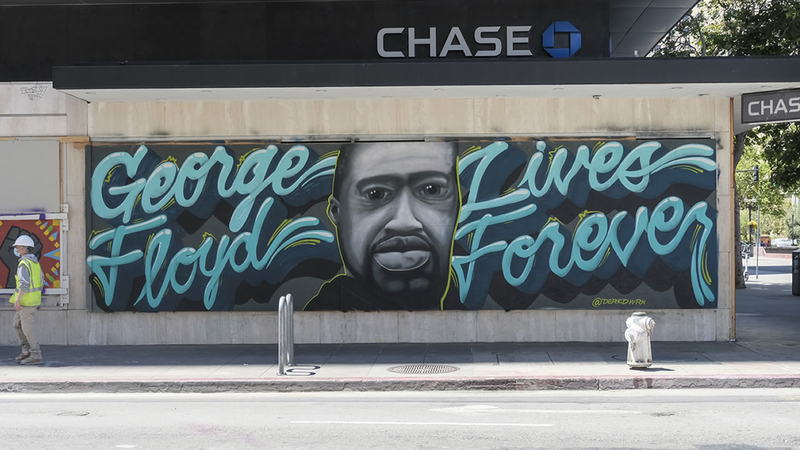 OAKLAND, Calif. (KGO) -- For all of the times George Floyd appears along Broadway in Oakland, a person might surmise that maybe they changed the name of this grand old street.

That would be premature because other names appear, as well, in what has become a rogue gallery of injustice and a colorful rallying cry for cultural revolution.

"It is shouting that something is wrong and we need change," observed Liz Strickland as she photographed the scene.

This display of murals is so powerful that it has drawn people from across the region. Their importance is so deep that some of the best explanations may be metaphorical.

"Well, it's a boiling point. Not that the fire wasn't there under the water. But we reached a point where it has changed," said the artist known as Refa, who painted three white words on a black background with a simple message, "End Police Terrorism."

When Refa and some friends put that mural up two weeks ago, they had no idea how long any of this work would last.

Now, Randolph Belle has made it his business to begin the artists' work.

At the heart of this, one word. Context. It's the idea that these works came from a moment, and the moment from movement.

These murals represent history, the kind that begins as a narrative on walls before it goes into books.

The demonstrations we have seen our streets in the last few weeks come from a place that many of us, and the Black community in particular, know well.

As people march now, they have done so before, and protest art has followed as it always does.

Fifty years from now, Broadway's plywood expressions of anger, frustration, and hope could become artifacts, "Like pieces of the Berlin Wall," says Randolph.

We are likely to see some of what he saves in museums.

"You have to document the moment. The value and relevance comes later."

For now, however, that same value and relevance is all around us on Broadway. It remains fresh, still drying in places, and in that way, is as fluid as this moment.

"The message is clear. The writing is on the wall," said Refa.