"It's gonna be a Garlic Festival, yes," Noceti said. "I'm not gonna use their name -- Gilroy -- I would never do that"
KGO
By Amanda del Castillo 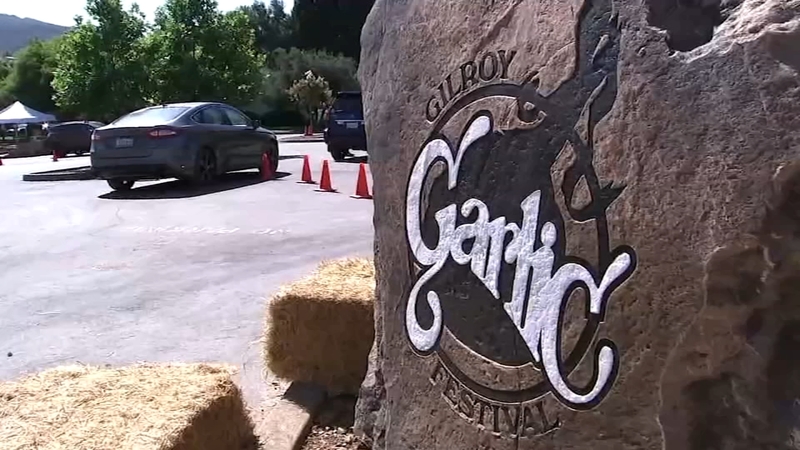 GILROY, Calif. (KGO) -- Social media has been spiraling since Sunday, when a Facebook post went up on the San Joaquin Asparagus Festival page.

"We heard the extremely sad news that the Gilroy Garlic Festival will not be holding their annual big Garlic festival. We just couldn't let that happen! The Noceti Group is thrilled to announce we will be hosting the Garlic Festival this year. More details to come soon! Stay tuned!"

A mention of the Gilroy Garlic Festival not returning in its traditional format, and the promise organizers behind the San Joaquin Asparagus Festival would be hosting the Garlic Festival. The post even teasing details to come.

"It's gonna be a Garlic Festival, yes," Tony Noceti, President and CEO of the asparagus festival said. "I'm not gonna use their name- Gilroy -- none of that -- I would never do that."

Noceti said he took on the San Joaquin Asparagus festival after it was announced in 2014 that the Stockton Asparagus Festival announced it would no longer be operating.

He said an official announcement on the group's garlic event will come on Thursday. Noceti maintaining he's never claimed the festival would be affiliated with Gilroy.

"They announced they're done. I didn't- I didn't announce it. They announced it," he told ABC7 News. "I'm just trying to keep it going for the nonprofit's and the culture and the people."

In late-April and after more than 40 years, the Gilroy Garlic Festival Association announced financial challenges had forced organizers to reimagine the time-honored tradition for 2022 and the foreseeable future.

The traditional Gilroy Garlic Festival many have come to love is no more, as organizers say future events will focus on smaller settings.

Ultimately, the sprawling festivals at Christmas Hill Park have come to an end. Three smaller events are planned in its place.

On Monday, the association made it clear, Stockton is not the successor of the beloved event.

Releasing a statement that read:

"The Stockton event has nothing to do with Gilroy's cherished homecoming," Ken Christopher, the Executive VP of Christopher Ranch said. "We're honestly just a little bit dumbstruck and confounded on why they said what they said."

"I don't know the motivation behind the organizers for throwing that out there. I have no idea. I hope they have a great festival," Gilroy Garlic Festival Association past president and current board member Tom Cline said.

Instead, he added it's clear success breeds duplication.

Cline mentioned Gilroy got the idea of its Garlic Festival after one of its organizers visited France decades ago.

"We took it to the next level," he said.

Cline said any event celebrating garlic is a testament to what the association has done for 43 years.

The first National Garlic Festival comes to Fresno in just a few weeks, aiming to spotlight Fresno County as the "True Garlic Capitol of the United States."

According to the 2020 crop report, Fresno County produced 77% of the nation's garlic crop. Garlic is the number seven crop in the county.