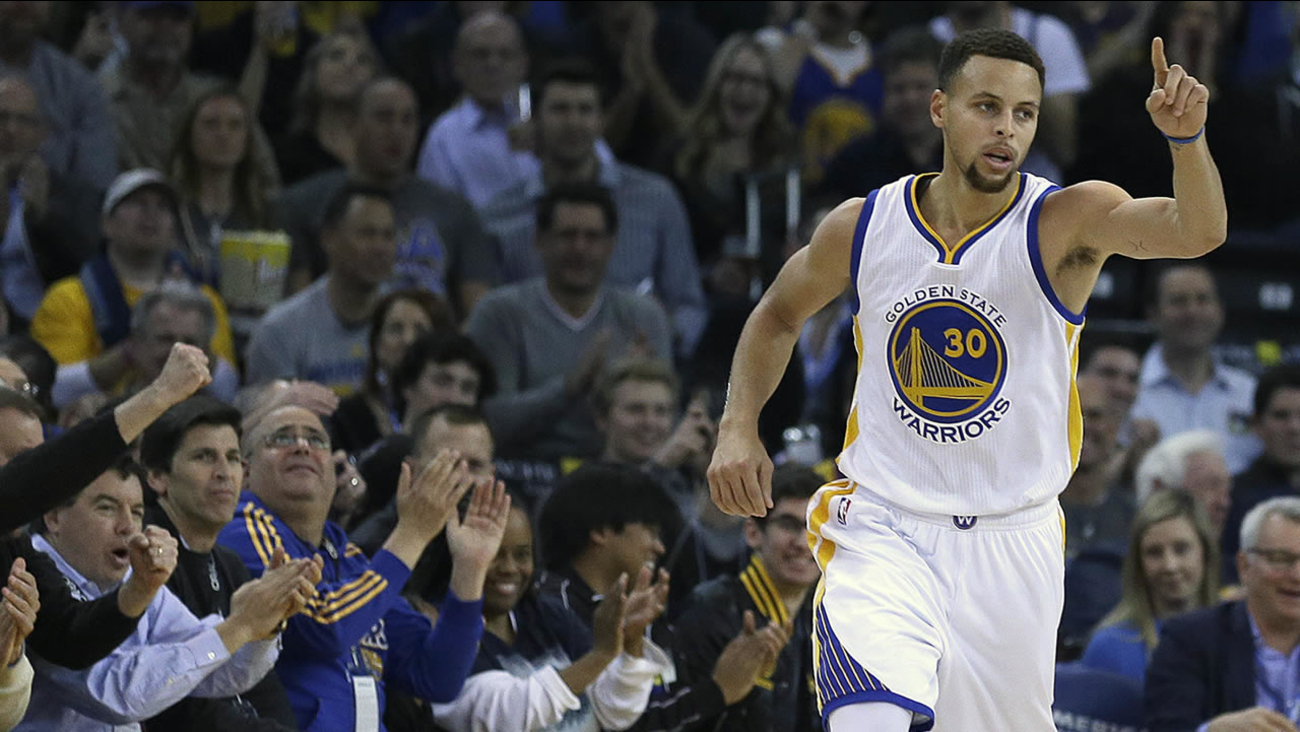 Golden State Warriors' Stephen Curry celebrates a score against the Miami Heat during the first half of an NBA basketball game, Monday, Jan. 11, 2016, in Oakland, Calif. (AP Photo/Ben Margot)

NEW YORK (KGO) -- The NBA's reigning MVP dominated the All-Star game this weekend. Then on Monday morning he went one-on-one with "Good Morning America" to talk about his cooking skills, his golf game, and of course his little girl.

Curry had a huge game on Sunday, but he's not the only showstopper in the family. His daughter Riley is able to put on quite a performance. And that's what's so endearing about Curry. For all his professional success, he comes across as a great husband and father.

The Dubs superstar beloved for his skills on the court as well as his demeanor off of it. During the All-Star game Sunday night he dominated, helping the West to a record-setting win over the East.

And that's not all. Curry has led Golden State to the best NBA start ever and the team is on track to break Michael Jordan and the Chicago Bull's record number of wins.

"I don't know how many times you're going to be in a position to chase, you know, a historical record like that and be an NBA team that everybody remembers," he said. "We'll go after it, but getting the championship will be much more important."

When asked if he thinks he's the best player in the NBA, Curry said, "I think that yes, by the way that my mentality, my focus and motivation when I go out there."

But when it comes to life at home, Chef Steph defers to his wife Ayesha.

"I only have one meal," he said. "It's like an Italian sausage egg noodle pasta. Five ingredients, 15 minutes, I keep it simple."

RELATED: Warriors honored by Obama at the White House

Adorable postgame interview antics have turned daughter Riley into a star in her own right.

"She's got so much personality and just so much fun about her," said Curry.

But Curry admits President Barack Obama got the best of him on the links.

Curry blames his poor golf game on the Secret Service.

"I need a rematch and we can call it square,"

It's hard to believe Curry is only 27 years old.

The Golden State Warriors next game is Friday.


That moment when you close out #NBAAllStarTO with a half-court #SPLASH. 👌🔥 pic.twitter.com/udq15RIL4W

It was a big night for #StephenCurry at #NBAAllStarTO. Enjoy highlights from his 26 points, 5 rebounds & 6 assists.https://t.co/mwEeIyXByv

Pretty sure @StephenCurry30 had a great time at #NBAAllStarTO. pic.twitter.com/0Sh2jY8Q7s