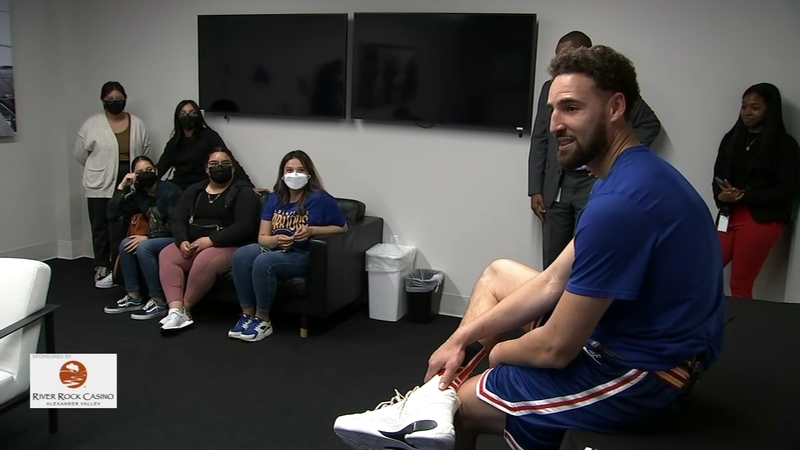 SAN FRANCISCO (KGO) -- Every game at Chase Center, Dub Nation cheers for their Warriors. Every home game this regular season, the Warriors have returned the favor, donating up 50 tickets per game to deserving groups in the community.

"It feels amazing that we are noticed by the Warriors, they are a championship team so it feels good," said Jordan Irwin.

Irwin attends Richmond High and is part of the "College Is Real" program, which aims to put students in position to be the first in their family to graduate from college.

"It's giving me a lot of opportunities and more lessons and ways to help me," added Nikky Barron a Richmond High freshman student.

During a recent regular season home game, Barron and her classmates were being hosted by Warriors superstar Klay Thompson to attend the game, which also included a special postgame surprise.

Following a win over the Utah Jazz in which Klay Thompson scored a game-high 36 points in a win, the 'Splash Brother' surprised the students with a special meet and greet after the game. Thompson greeted everyone with high fives all the way around and gave words of wisdom about the college experience.

"You can learn so much at your age, learn a second language, anything. Just embrace it. It's cool to be smart. For real, it's really cool to be intelligent," said Thompson. "You can do anything. Don't let anyone ever tell you not to chase your dreams, you know? Just be whatever you all want to be."

After posing for some pictures, Klay left for the locker room, but the impact left a last impression.

"It's cool to be smart... You can do anything. Don't let anyone ever tell you not to chase your dreams, you know. Just be whatever y'all want to be." @KlayThompson w/ words of wisdom for these Richmond high school students after last night's game. #DubNation cc @DubsCommunity https://t.co/qhsJyVuGsE pic.twitter.com/ysXy4nHIwm

"It was honestly just such an inspirational moment," said Izaak Vanpell a Richmond High senior. "Seeing someone be like human, it was a real nice interaction. Instead of seeing people from a different perspective and actually meeting them face to face is like, almost life-changing."

When Vanpell was asked about the biggest piece of advice Thompson left, he responded with this. "Just try everything, don't be limited and just keep chasing whatever you want to do," said Vanpell.

"Just immerse yourself and just try to be present every day. We're human, it's our tendency to look forward to the future but just do your best every day and I'll promise you'll have no regrets," said Thompson.

Golden State Warrior Kevon Looney stood in as principal for the day in Oakland as part of the Warriors Back to School in the Bay program.