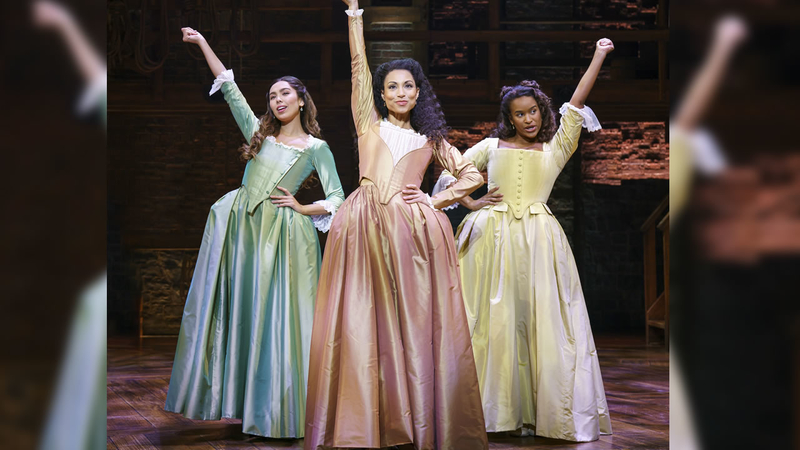 SAN FRANCISCO (KGO) -- Sabrina Sloan is making breakfast for her two children before hopping in a car to take them to school. The morning is filled with typical mom stuff -- packing lunches, making sure everyone's brushed their teeth and their version of carpool karaoke.

But in 11 hours, Sloan will transform into Angelica Schuyler for the groundbreaking hit musical 'Hamilton,' which is playing at the SHN Orpheum Theater in San Francisco.

She jokes after dropping off her kids at school that most of her "Hamilton" castmates probably aren't awake yet.

The next few hours will be precious alone time for the actress, whose enviable resume includes Broadway shows like "Hairspray" and "Motown: The Musical," and national tours including "In the Heights" with "Hamilton" creator Lin-Manuel Miranda.

"These five hours when they're in school, I not only have to do some self care for the purpose of the show -- whether that's working out, Pilates, my physical therapy I do once a week -- but taking some time to read a book or go do something for myself that's a retreat from both parenting and work," Sloan explains. "There are not a lot of hours to do that. You have to be efficient."

Getting ready in the evening is another juggling act. It's just two hours before the curtain goes up at 7 p.m. and Sloan is finishing a game of Foosball with her kids before they leave for a soccer scrimmage. She's already made dinner and has eaten herself.

"Generally I like to eat by 4 o'clock on a show day because I'm digested. I have enough in there but I'm not stuffed into the corset."

With her kids and husband out the door, she switches into actor mode. In her living room, she runs through breathing exercises, stretches and does vocal warm-ups, which range from operatic to a rap solo from the show.

"If you're talking a lot during the day and you're rapping a lot, it's easy to kind of wear out the voice there. So I have to strengthen the whole voice. It's very much like being an athlete."

At 6 p.m., it's time to head to work. A ride on Muni lands her outside the theater, where she weaves her way past audience members taking selfies and then greets fellow cast members before heading into the backstage door.

With eight shows a week and rehearsals, Sloan acknowledges that balancing being an actor, a mom, and a wife is certainly challenging, but she describes her "Hamilton" experience as a dream.

"It's something that I get to live and breathe every night while I'm also raising my kids," Sloan says. "So this moment for me is just an incredible time in my life."