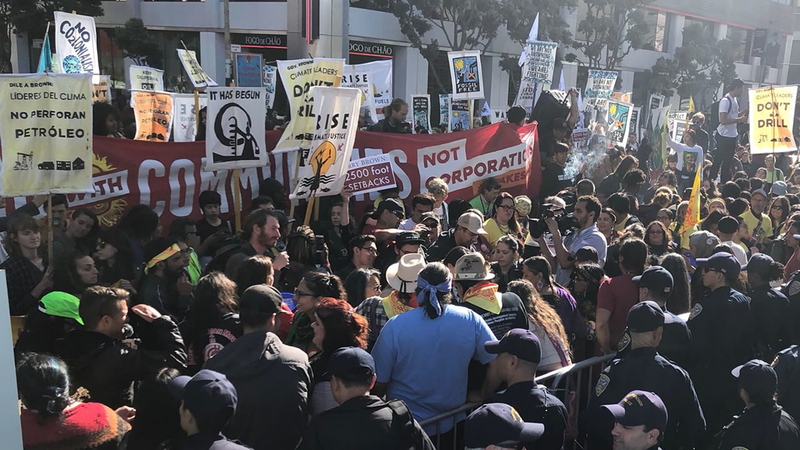 SAN FRANCISCO (KGO) -- Hundreds of supporters for the environment took to the streets to criticize their own outside of the Global Climate Action Summit being held in San Francisco.

Their actions took many by surprise including the former mayor of New York Michael Bloomberg who said, "Something is crazy here."

Two arrests were made Thursday as protesters crowded the streets near Third and Howard Streets demanding that the people inside the Climate Action Summit do more to stop the extraction of oil in California. The two people detained were cited and released.

The demonstrations did not sit well with Bloomberg.

"It reminds me of people who want to build a wall along the Mexico border to keep people out from a country that we go to for vacations, something is crazy here," expressed Bloomberg during a morning press conference.

That remark was criticized by the nonprofit Food and Water Watch. Executive director, Wenonah Hauter wrote in a statement, "There's nothing crazy about opposing fossil fuels."

Bloomberg and California Gov. Jerry Brown are seen as political leaders in the efforts to reverse the effects of climate change.

"Climate change is still not at the top of the political issue, I don't think in any country, but we're putting it there, said Brown.

President Donald Trump withdrew from the Paris Climate Pact more than a year ago. The governor was asked how he thought Trump would be remembered on the issue of climate change.

"On the path he is now, I don't know, liar, criminal, fool, pick your choice," expressed Brown.

Thousands of people with an interest in this summit came to pledge their support for the 2015 Paris Agreement. Back then, the U.S. vowed to reduce carbon emissions by 26 percent by 2025. Bloomberg said we're already half way there.

Hollywood also weighed in today on the issue. Actor Harrison Ford spoke about a new hope for the next generation.

"We've accomplished a lot but all of that are at risk if we don't change the path that we are on today the future of humanity is a stake," said Ford who is vice-chair of Conservation international.