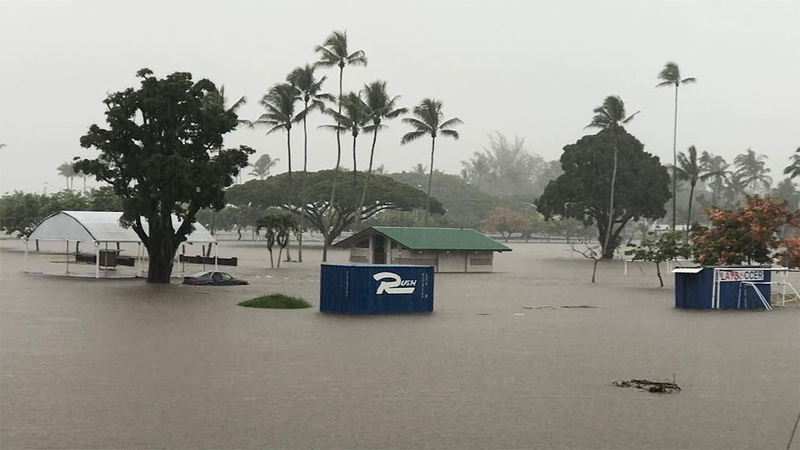 HONOLULU (KGO) -- More than 19 inches of rain fell on the Northeastern section of the Big Island in Hawaii in just 24 hours. Hurricane Lane continues its path toward the other islands which could be devastating.

This much rain in such a short period of time, has already caused major flooding on the Big Island.


Hurricane Lane is expected to impact other Hawaiian islands, the question is how badly will they be affected?

Former Bay Area news photographer Don McCuaig spoke to us from his home in Maui. "Most of the stores are boarded up and sand bags. There's only a couple of restaurants open--now the wind is just starting," said McCuaig over the phone.

HURRICANE LANE vs. KILAUEA: What happens when a hurricane meets a volcano?

Kathleen Watanabe lives in Kauai. She says the shelters opened this morning. "It's been clearly known to the public that there are not enough shelters and so people are encouraged to stay in their own homes if they can make it safe enough to do so," said Watanabe.

She's worried about the north shore of the island which is is still recovering following last April's devastating floods.

Hurricane Lane is moving slowly, at about 7 mph which means residents will experience prolonged heavy rainfall and that according to ABC7's meteorologist Mike Nicco is more dangerous than heavy winds.

"The storms are moving slower, they have more energy and they have more water in them so when the go slower over an area, it gives them a longer duration of time to drop even heavier rain than they use to drop, so that all adds up," said Nicco.

RELATED: A look at travelers' rights during Hurricane Lane

A study which appeared in the journal "Nature" found that hurricanes are hovering in one place for longer. In the past 70 years, hurricane speeds have declined 10 percent worldwide.

Rainfall flooding and not the winds are responsible for more deaths during a hurricane.

RELATED: Here are the 5 most vulnerable cities during hurricane season

"I'm hoping it changes course, but we can't assume that and then have a major problem and say well we are hoping, so we're planning for the worse and hoping for the best," said Kirk Caldwell, the mayor of Honolulu.