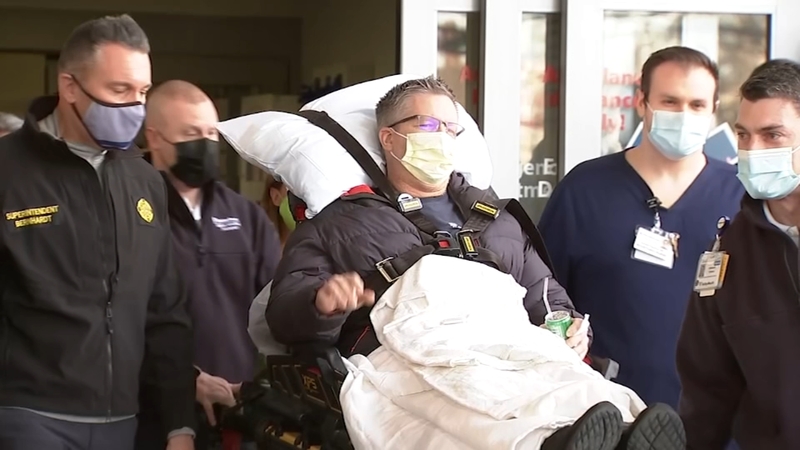 PHILADELPHIA -- The pilot credited for a miraculous crash landing in Pennsylvania was released from the hospital Sunday to a heroes welcome of first responders and family members, thankful he's alive.

Danial Moore was piloting the medical helicopter Tuesday. He had a two month old patient on board he was transporting from Hagerstown to Children's Hospital of Philadelphia. The chopper crashed in front of Drexel Hill United Methodist Church.

"I had God as my co-pilot that day and we took on the care of the crew and when we landed in his front yard so that's kind of nice," said Moore as he was released from Penn Presbyterian Hospital.

He says his memory is in pieces. He remembers his medic taking the two month old infant to safety and he remembers his flight nurse dragging him away from the burning helicopter. If there's one thing he knows for certain, however, that landing was a miracle.

Though hailed as a hero, he's giving credit to everyone else.

"I want to thank those firefighters and I want to thank all the first responders that showed up that day, and the every day heroes, the Uber driver and all those folks that were running toward the burning helicopter rather than away from it," he said.

"What happened that day was nothing short of a miracle," said Moore's fiancé, Gail Miller. "They survived. There's a very low chance of actually surviving a helicopter crash, to have four people survive a helicopter crash is virtually unheard of."

Moore, a pilot of 27 years avoided the church, powerlines, and people as he landed. Despite the mangled aircraft, everyone on board was safe. Moore was the only one seriously injured with fractured ribs, sternum, and vertebrae, among other injuries.

"I'm just glad to be here and I'm glad I got my crew back alive," he said.

An ambulance is taking Moore back to his home in Virginia. He's being escorted by Baltimore police.