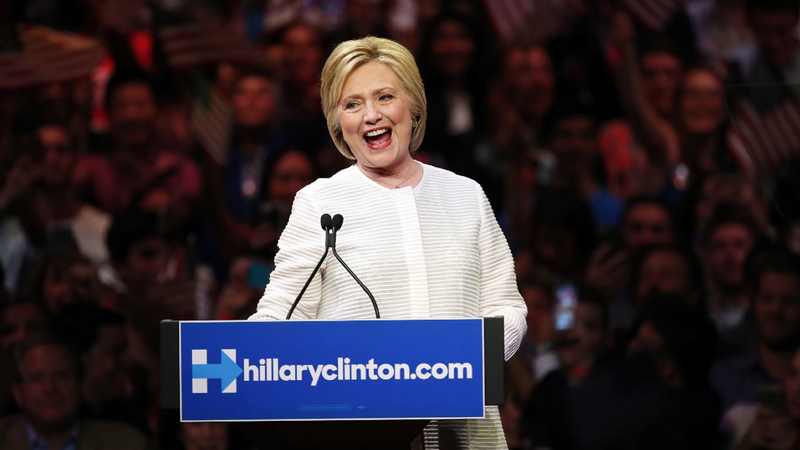 NEW YORK (KGO) -- Hillary Clinton made history by becoming the first women to ever secure a presidential nomination for a major political party.

Don’t let anyone tell you that great things can’t happen in America. pic.twitter.com/dtgjwmcfMm

Eight years to the day after she conceded to Barack Obama, Clinton greeted supporters in New York, this time triumphant.

RELATED: Breakdown of which California counties voted for each presidential candidate

"The first time in our nation's history, that a woman will be a major party's nominee for president," Clinton said.

The United States has hosted 56 presidential elections. Zero featured a woman's name at the top of the ticket until now.

Clinton says her political comeback and Tuesday night's victory are bigger than herself. "It belongs to generations of women and men who struggled and sacrificed and made this moment possible," she said.

ABC's David Muir spoke to Clinton in her first interview as the presumptive Democratic nominee.

David Muir: Is it sinking in?

Hillary Clinton: This is sinking in, I'll tell you that. It's an overwhelming feeling, really.

Now she's hoping to unify the party and says her campaign is reaching out to Senator Bernie Sanders.

Sanders is refusing to drop out, despite the nearly impossible delegate math, and word is that at least half of his staff will be laid off on Wednesday.

"This is a very, very steep fight, but we will continue to fight for every vote," Sanders said.

A meeting between the Vermont senator and President Obama is set for Thursday.

Meantime, Donald Trump is making his own pitch to Sanders supporters. "To all of those Bernie Sanders voters who have been left out in the cold by a rigged system of super delegates, we welcome you with open arms," he said.

Obama is expected to endorse Clinton as early as this week.

Tonight, we can say with pride that, in America, there is no barrier too great and no ceiling too high to break. pic.twitter.com/7vbGPJe543

Wish Mom could have been here to see tonight. pic.twitter.com/NalmZoKoV7

To every little girl who dreams big: Yes, you can be anything you want—even president. Tonight is for you. -H pic.twitter.com/jq7fKlfwGV