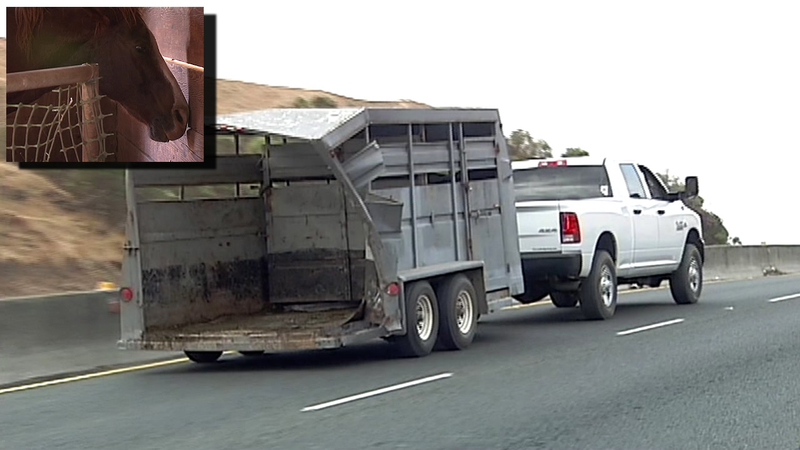 SAN FRANCISCO (KGO) -- The California Highway Patrol needs your help finding a man accused of rear ending a horse trailer and severely injuring the horse inside before fleeing the scene.

The owners of the horse are now by his side hoping he'll make it.

His owners say 18-year old Chance is not himself. The ranch horse may have fractured his neck after a Toyota Tundra rear ended the trailer he was in.

Sharlie Folsom was in the truck that was pulling the trailer. "We were just sitting in the truck and all of a sudden we felt this impact. We didn't know what hit us, but it was hard," she said.

When CHP officers arrived at Kirker Pass Road just outside Concord, the driver was already gone. "The witness said, 'hey that man just got in a car and left.' I said: 'what?' He was gone, never saw him again," Folsom said.

The California Highway Patrol now has a good description of the man driving that truck. Officials said he has a shaved head, tattoos on both arms and is 5 feet, 7 inches tall.

At the time of the accident, Chance was being transported by the family to help gather up some cattle. "He can't flex his neck in hardly any position. He's holding his ears pinned back. He has some droopiness on his left side," owner's daughter Shawnie Cunningham said.

"I don't think he'll be able to work again, but we hope he would pull through," Folsom said.