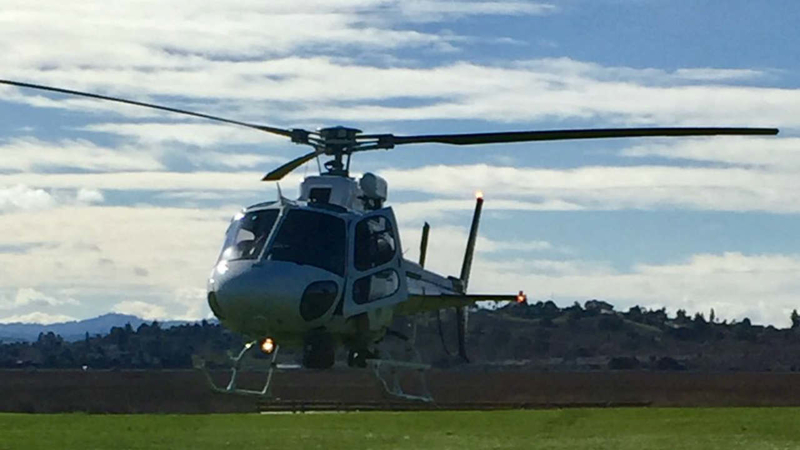 VALLEJO, Calif. (KGO) -- People on a hot air balloon ride out of Sonoma got two rides on Sunday morning. One ride was in a balloon, while the other was in a police helicopter.

Strong winds forced their pilot to land them on to Skaggs Island.

"At no time did he feel like they were in danger," Shannon Eckerman, Sonoma Ballooning Adventures' business manager said. "He just made the best decision with what he had to work with today."

Just talked with hot air ballon company involved in the emergency landing near Vallejo. Company says this was a “text book dry landing.” 11 people total on board. Pilot has grown up in ballooning & worked for company for 2 years. @abc7newsbayarea pic.twitter.com/gVqiAZHOiv

Ten passengers and the pilot ended up in marshlands on Skaggs Island outside of Vallejo. To be clear, the unexpected diversion was not a crash, or even an emergency landing by ballooning standards.

Eliav Cohen of the American Ballooning Safety and Training Association said what happened is called a "rip out" or "dry landing."

"In this case, it's an unfortunate, not greatly accessible area to reach the balloon," Cohen said. "But, it was a safe and appropriate landing spot to put the balloon down and it's better than landing in the bay or around a lot of houses."

No one was hurt during hot air balloon landing. Half of the people on board were out of towners. The others were staff members of the balloon company. Spokesperson says everyone “had a good time” @abc7newsbayarea pic.twitter.com/NOPNnfF4Ye

A California Highway Patrol helicopter brought all 11 people on board to a park in Vallejo. No one was hurt.

"I was really confused about what was going on," Marcella Orozco, a witness in Vallejo, said. "I didn't even know there was a balloon involved in it because it came from all the way over there, to all the way over here."

Sonoma Ballooning Adventures said the pilot has had his ballooning license for eight years and handled Sunday's events by the book.

"I've actually spoken with all of our guests," Eckerman said. "They all had a great time and it was a great adventure on a Sunday morning."

Here’s a look at the hot air balloon getting loaded onto a boat from Skaggs Island @abc7newsbayarea pic.twitter.com/3ZnZwJFnSV