What exactly is a hyperloop? 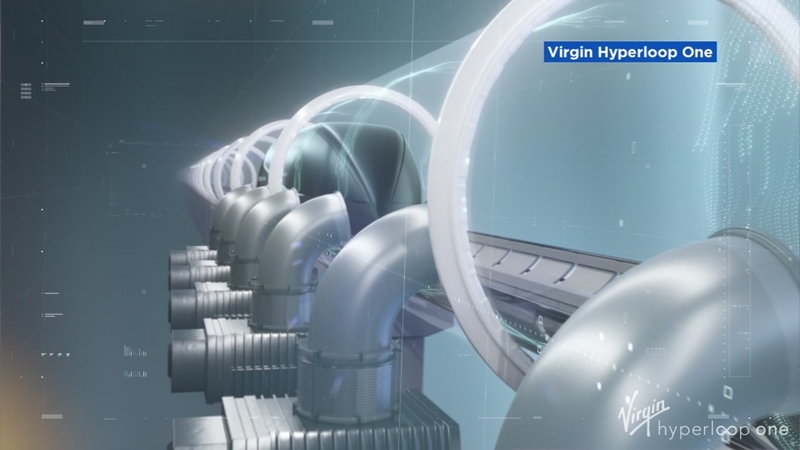 What exactly is a hyperloop?

SAN FRANCISCO (KGO) -- Civic and business leaders in Cupertino are trying to a high-tech solution to traffic congestion. Several ideas are being discussed, including magnetic levitation vehicles, automated buses, a monorail and autonomous transit.

RELATED: Cupertino hyperloop? It could be the first in the Bay Area

There's one more -- a hyperloop.

So what exactly is a hyperloop?

It's a passenger vehicle that floats above a track using magnetic levitation and is propelled by electricity.

It operates within a closed, low-pressure tube that reduces drag and allows the vehicles to move at speeds up to 670 miles per hour. That's around the cruising speed of commercial jetliners.

That's also two to three times faster than high-speed rail and trains operating strictly using magnetic levitation, according to Hyperloop One, a Los Angeles based company that is the first to build a working hyperloop system.

Hyperloop is an autonomous system. There's no operator. The system can be built underground in a tunnel or operated above ground atop columns.

What kind of noise is generated at high speeds? "A big whoosh" is how Hyperloop One describes the sound.

How does the motor work? This is how Hyperloop-One describes their system: Virgin Hyperloop One vehicles are propelled using a linear electric motor, which is a straightened-out version of a conventional rotary motor. A conventional electric motor has two primar parts: a stator (the part that stays still) and a rotor (the part that moves or rotates).

When voltage is applied to the stator, it makes the rotor spin and do the work of, say, spinning a power drill.

A proprietary linear electric motor has the same two main parts; however, the rotor doesn't rotate but instead moves in a straight line along the length of the stator.

In the Virgin Hyperloop One system, the stators are mounted to the tube, the rotor is mounted to the pod, and the pod straddles the stators as it accelerates down the tube.
Report a correction or typo
Related topics:
technologycupertinoelon musktransportationsilicon valleyhyperloop
Copyright © 2022 KGO-TV. All Rights Reserved.
RELATED
Cupertino Hyperloop? It could be the first in the Bay Area
HYPERLOOP
Cupertino Hyperloop? It could be the first in the Bay Area
TOP STORIES
7-year-old child hit, killed by car while riding bike in Fremont
EXCLUSIVE: Inside dramatic Daly City cliff rescue
ABC7's new 24/7 live stream offers local news, weather
United cancels couple's flight, charges $4,000 more for same seats
Here's why omicron infection doesn't protect you from other variants
SF archbishop bans Pelosi from communion over abortion support
Fremont standoff over, suspect inside burning condo taken to hospital
Show More
4 dogs die after fire at doggy daycare in East Bay, police say
2 Cal students make history as 1st nonspeaking autistic graduates
Warriors battle back to beat Mavs 126-117, take 2-0 lead in series
Judge: COVID-19 asylum restrictions must continue on US-Mexico border
Celebrate National Streaming Day with Hulu for $1/month for 3 months
More TOP STORIES News