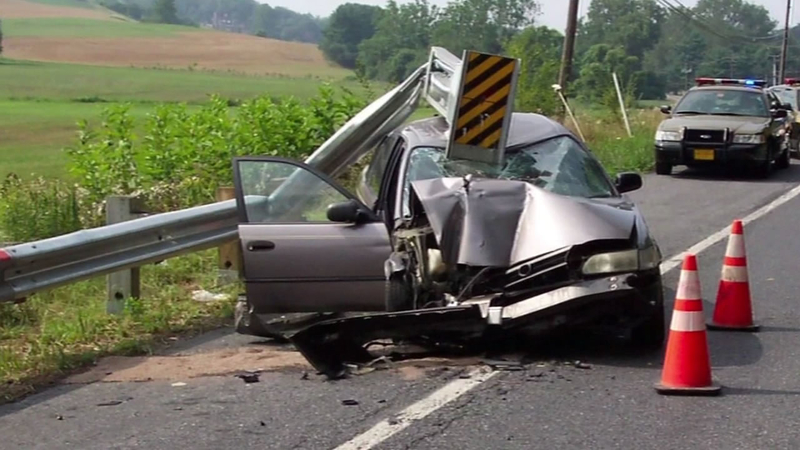 SAN FRANCISCO (KGO) -- A new study about guardrails out this week confirms dangers raised by the ABC7 News I-Team in April 2013. They can malfunction, sometimes causing injury and even death. "20/20" explores the issue on ABC7 Friday at 10 p.m.

We aren't talking about when a car bumps into the main part of the guardrail. These crashes are from the side, when the car strikes the very beginning of the guardrail as you're driving down the highway.

The biggest guardrail manufacturer in the world is facing a growing number of lawsuits, over its guardrail end terminals named ET-Plus.

They can malfunction, sending the guardrail slicing through a vehicle like the accident Traylor was involved in, located in North Carolina back in January.

"Had the guardrails done their job, I probably would have walked away just going, 'Damn, I'm an idiot,'" Traylor said after the accident. He did lose his legs and is now in a wheelchair.

The guardrails can also buckle in some cases, jolting the car back into traffic or off the road. That's allegedly what happened four years ago in Concord. The SUV plummeted off Highway 4 and caught fire, badly burning a 16-year-old boy. That lawsuit is still underway.

One of Trinity's competitors, Josh Harman, has filed a federal lawsuit about what he believes are design flaws in the ET-Plus. I spoke with him Friday in Little Rock, Arkansas.

"Dan, I've been in this business 25 years. I'm not out here but for any other reason but safety. This thing is killing people and if something is not done, it could be your children or mine," Harman said.

This is how the ET-Plus is supposed to work: the force of the crash feeds the W-shaped guardrail into the end terminal, where it gets flattened into a ribbon of steel, curling off to the side. That process absorbs the energy of the crash and slows down the vehicle.

Last year, Harman told me Trinity shrunk the dimensions of the ET-Plus to save money. As a result of that change, Harman said, "The four-inch locks up. When the head locks up, the head either kicks to the side, flips the vehicle around and ultimately the W-beam, which is extremely rigid, enters the compartment, cuts off legs, cuts people in half."

Those concerns are echoed by a study just out from the Safety Institute, that identified hundreds of crashes involving the ET-Plus and compared them to crashes with other end terminals. The group's founder spoke with to me on Friday via Skype.

A spokesman for Trinity Industries declined to be interviewed and in an email declined to comment on the Safety Institute study. He did say, "Trinity has a high degree of confidence in the performance and integrity of the ET-Plus System" and it "continues to be accepted by the Federal Highway Administration for use on U.S. highways."

This week, 20/20's Brian Ross caught up with Nick Artimovich -- the Federal Highway Administration official who approved the ET-Plus.

A Caltrans spokesman told the I-Team on Friday they have not identified any problems with the ET-Plus.

There are hundreds of thousands of them on roads across the country, including California.