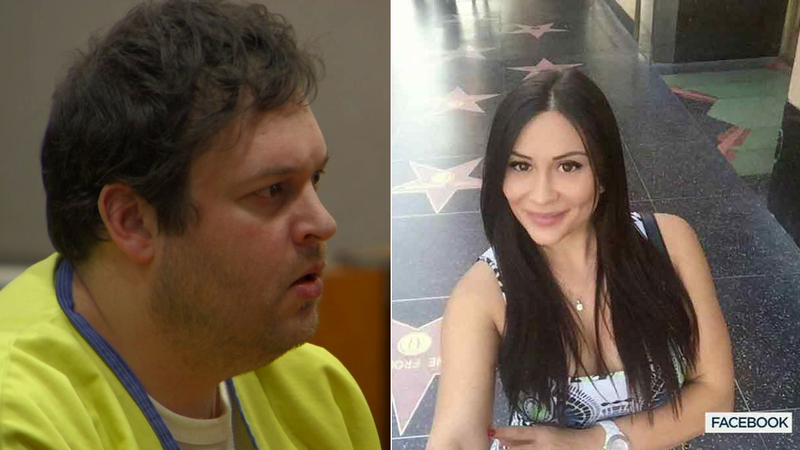 WEST HOLLYWOOD, Calif. -- A Canadian-born graphic novelist convicted of torturing and killing his fiancee in West Hollywood was sentenced to life in prison without parole on Tuesday.

Blake Leibel, 37, was sentenced in the death of Iana Kasian in 2016. Leibel was found guilty last week.

The victim's mother, Olga Kasian, delivered an emotional impact statement in court before the judge read the sentencing.

"There are no words to express the pain and despair in my heart. I never thought that one day my life would be broken. For two years I've been asking God and myself, 'Why? Why did my daughter have to endure this inhumane torture and suffering?' Because she wanted to laugh and to love? Because she wanted to have a baby and have a family?'" Olga Kasian said with the help of a Russian translator.

WARNING: Details in this story may be graphic for some readers.

The couple lived together in West Hollywood, and Kasian had given birth to their child weeks before her death.

An autopsy report was released Wednesday, revealing horrific details into how a woman was killed allegedly by her boyfriend in West Hollywood.

Investigators said Kasian had been found in her bed, apparently suffering from blunt force trauma to the head. Authorities said Kasian was tortured and mutilated before she was killed, and all of her blood was drained from her body.

Graphic details in the recently released report also indicate that her scalp was missing, leaving her skull fully exposed. Her scalp was never found.

The report indicates the scalp had been cut at the back of her head, but in other areas it appeared to have been ripped away. The report also stated portions of the right side of her face were torn off, including her right ear.
Report a correction or typo
Related topics:
southern californiatorturecrimemurdersentencingbitingwoman killedu.s. & worldbody found
Copyright © 2021 KABC-TV. All Rights Reserved.
RELATED
Man found guilty in gruesome 2016 murder of model in WeHo
Autopsy report reveals murdered model was missing scalp; father of her baby could face death penalty
Man arrested in death of live-in girlfriend, 30, in West Hollywood
TOP STORIES
Preliminary magnitude 3.4 earthquake rattles North Bay, USGS says
SF, Marin counties easing mask restrictions today
3 fires break out within 8 hours in SJ, including at a school
FDA panel endorses booster shot for J&J COVID-19 vaccine
UC Berkeley Econ Prof. David Card discusses federal minimum wage
Dodgers beat Giants 2-1 on controversial game-ending call
Biden plans to reinstate Trump-era 'Remain in Mexico' policy
Show More
Victim of the Bank of America, Zelle scam? Here are your rights
EXCLUSIVE: SF Walgreens employee scared to work after attack
Things to do in the Bay Area: Noise Pop's Block Party, Nocturne X
EXPLAINER: What exactly is a check-swing?
'Unhoused Resource Fair' reaches SJ residents living on streets
More TOP STORIES News