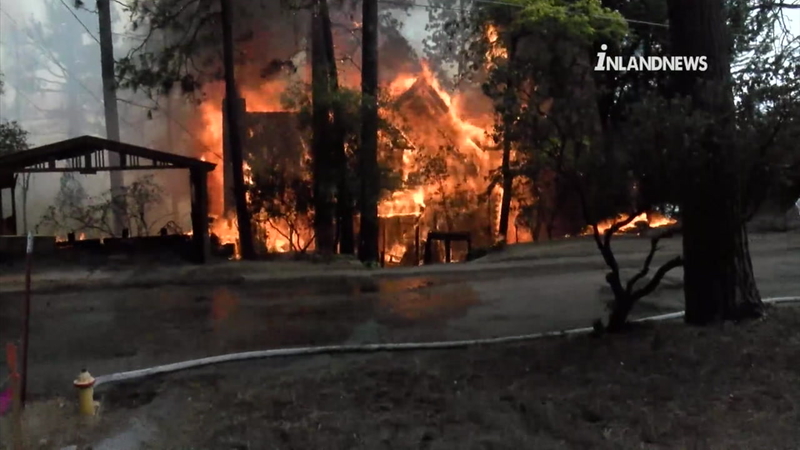 IDYLLWILD, Calif. -- Firefighters in the Idyllwild area on Thursday morning continued to battle a 4,700-acre brush fire that erupted the previous day and spread quickly, destroying five homes and prompting the evacuation of 3,200 people.

Governor Jerry Brown has declared a state of emergency in Riverside and Shasta counties due to the blaze.

➡️@JerryBrownGov declares State of Emergency in Riverside and Shasta counties due to #CranstonFire and #CarrFire https://t.co/2ADdmlIoF4

The Cranston Fire began about noon Wednesday as the apparent result of arson, according to authorities. A Temecula man, 32-year-old Brandon N. McGlover, was later arrested and booked on five counts for allegedly igniting several blazes in Riverside County. His bail was set at $1,000,000.

No injuries have been reported.

Here is a map of the terrain the #CranstonFire has burned so far; 4700 acres. The point of origin is on the SW corner along Hwy 74. You can see how close it burned to Idyllwild along the northern perimeter. pic.twitter.com/BNPgvoHFAe

But some homeowners were determined to stay and take a stand against the flames.

"Once that wind hit, man, it was just incredible," said Idyllwild resident Mario Deniz. "Everybody took off and we were the last ones here but, you know, it's our homes. What can we do?"

Some 700 firefighters were at the scene east of Hemet on Thursday, where the brushfire was 5 percent contained as flames burned along Highway 74. The emergency personnel represented Cal Fire, the Riverside County Fire Department and the San Bernardino National Forest agency.