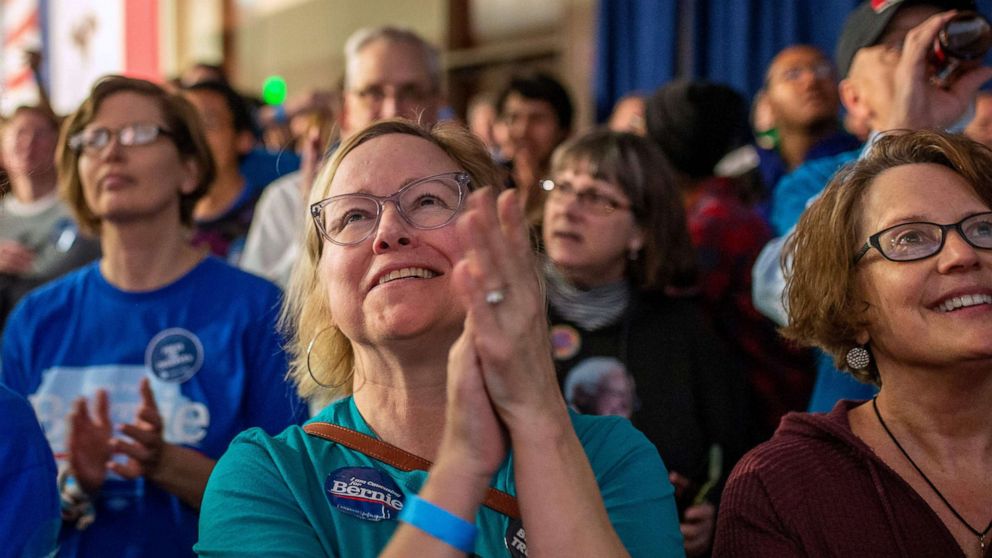 With 75% of precincts reporting, former South Bend, Indiana, Mayor Pete Buttigieg had 27% of the vote and Vermont Sen. Bernie Sanders had 25%, according to the Iowa Democratic Party. Massachusetts Sen. Elizabeth Warren had 18%, former Vice President Joe Biden had 16% and Minnesota Sen. Amy Klobuchar had 13% of the vote.

Iowa's caucusgoers were without results late Monday night and much of Tuesday after technical issues and confusion on the ground upended the vaunted caucuses. The ensuing chaos cast a pall over what has traditionally been a high spirited start to the Democratic primary season and raised questions about the impact of the Hawkeye State's first-in-the-nation status going forward.

Absent those full results, none of the candidates who crisscrossed Iowa leading up to the caucuses, making nearly 400 stops collectively, with more than 330 days spent in the Hawkeye State while holding more than 2,300 events and spending millions of dollars in ads and on campaign events, saw a return on their investment by having their "moment."

"Just in case you haven't been glued to your phone last few minutes, I want you to hear something from me," Buttigieg said Tuesday at a campaign rally in Laconia, New Hampshire. "A little later than we anticipated, but better late than never. Official verified caucus results are coming in from the state of Iowa. They're not complete, but results are in from a majority of precincts, and they show our campaign in first place."

"We want to thank the people of Iowa," Sanders senior adviser Jeff Weaver said in a statement. "We are gratified that in the partial data released so far it's clear that in the first and second round more people voted for Bernie than any other candidate in the field."

Despite his 16%, Biden said he was hopeful about the road ahead.

"Now there are a lot of votes left to cast in the campaign, and I'm going to fight for every single one of them," Biden said in a fundraising email. "But, I'm going to need your help to do that."

The Trump campaign seized on Biden's vote total, saying he "got beat like a drum" in an email to supporters.

Ahead of the release, Iowa Democratic Party Chair Tony Price sought to offer accountability on the technical issues that led to a protracted delay in caucus results while stressing that backup systems were successful.

"The thing to remember here, folks, is that we have a paper trail ... We have backups to this system," he said. "We have redundancies built in."

On Monday night, "inconsistencies" became clear as precinct caucus results started coming in and they were run through an accuracy and quality check, according to Price, who noted that the "underlying cause of these inconsistencies was not immediately clear, and required investigation, which took time."

Price previously said the pre-planned backup measures of calling in results and entering the data manually "took longer than expected."

Polk County Democrats Chairman Sean Bagniewski confirmed to ABC News that the DNC had been calling precinct chairs and asking for results -- meaning the national party committee is actively engaging in calling the leaders of each precinct in order to verify the results.

And one Democratic official was told that the DNC was "taking over" the accounting. The official said that to their knowledge, this has never happened before.

Ahead of that results release, Carl Voss, a precinct chairman for Des Moines-55, said while attempting to drop off his precinct packet that he'd been contacted by the Democratic National Committee.

"They wanted a copy of my math sheet," he said.

Voss said he didn't know why they wanted his math sheet or if it was standard procedure. This was only Voss' second time as a caucus precinct chair and said he wasn't asked for this the first time.

Math sheets are included in the precinct packets that every chair received from the Iowa Democratic Party. In addition to the math sheets, presidential preference cards, county candidate petitions, and summary of results forms for delegates and alternatives are in the packet.

He added that while using the reporting app, they reported an overcount of participants and weren't unable to go back and revise the numbers.

But as results remained in limbo, a number of the 2020 Democratic presidential campaigns appeared to be growing antsy in anticipation and attempted to spin the thus-far ambiguous night as their own victory.

Buttigieg was on the ground in New Hampshire Tuesday and made multiple rounds on cable after claiming victory in the Iowa caucuses Monday night.

On "CBS This Morning," Buttigieg was asked if it was premature to say he won if the final reports weren't out yet. He pointed to his campaign's internal data.

"We have the results from our organization, and if you look at what we were able to do, what happened last night, the fact that this campaign was able to gather support in urban, suburban, and rural areas alike, in counties that Hillary Clinton won, counties that Donald Trump won, we are thrilled and absolutely consider that a victory," he said.

Other campaigns expressed frustration with the chaos and delay as well as concern over how the count will now be tabulated fairly.

Warren's campaign manager Roger Lau Tuesday morning expressed that doubt -- and saying even before any data is released -- that they've got the receipts.

"Our campaign collected photos and other raw documentation of the results at hundreds of caucus locations as part of our internal reporting process," Lau tweeted. "Today we will provide what we have to the Iowa Democratic Party to help ensure the integrity of their process."

His tone echoed that of former Vice President Joe Biden's campaign last night which called for a "full explanation" about the quality control methods used to verify the results, and a chance to respond before any results are released.

As other 2020 presidential candidates look for clarity out of Iowa as they pivot on to New Hampshire, the next early contest, former New York City Mayor Michael Bloomberg pressed on with his gambit to key in on the Super Tuesday spots with a high delegate yield. Moreover, he's specifically honing in on the swing states Trump picked up in 2016 that Democrats "should" have won, like Pennsylvania, Ohio and Michigan.

He is skipping the four early states -- Iowa, New Hampshire, South Carolina and New Hampshire -- in seeking to make inroads in California and woo and win its 415 delegates.

All in all, California has more delegates than all first four early voting states combined.

"I hear something happened in Iowa or didn't happen. I don't know which. Still can't figure that out. I was on a plane coming up here and I slept -- was sleeping and I woken up and I said, what happened? ... But while all the other Democratic candidates have flown to New Hampshire now, I'm here in Michigan because this is a state we absolutely -- Look, we have to win this state in November if we're going to beat Donald Trump," Bloomberg said during his organizing event in Detroit.