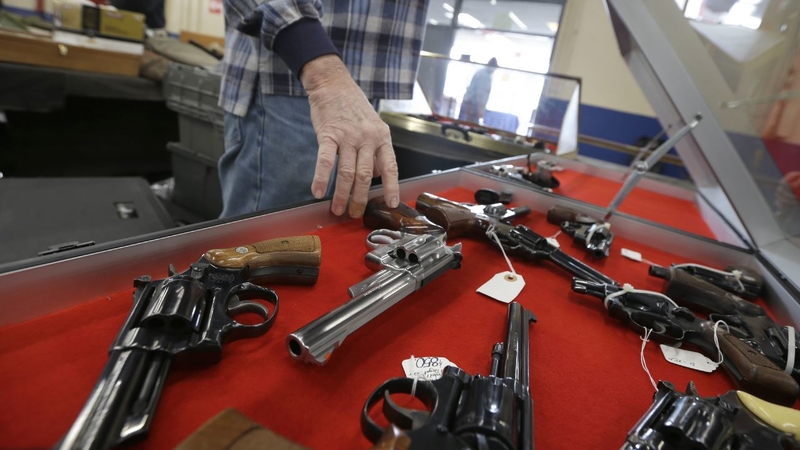 SACRAMENTO, Calif. -- Gov. Jerry Brown signed six stringent gun-control measures Friday that will require people to turn in high-capacity magazines and mandate background checks for ammunition sales, as California Democrats seek to strengthen gun laws that are already among the strictest in the nation.

Brown vetoed five other bills, including a requirement to report lost or stolen weapons to authorities and a limit of one gun purchase per person per month.
The Democratic governor's action is consistent with his mixed record on gun control. Some of the enacted bills duplicate provisions of a November ballot measure by Democratic Lt. Gov. Gavin Newsom. Some of the vetoed measures also appear in Newsom's initiative.

RELATED: Congress using social media to push for stricter gun laws
"My goal in signing these bills is to enhance public safety by tightening our existing laws in a responsible and focused manner, while protecting the rights of law-abiding gun owners," Brown wrote in a one-sentence message to lawmakers.

Gun control measures have long been popular with the Democratic lawmakers who control the California Senate and Assembly. But they stepped up their push this year following the December shooting in San Bernardino by a couple who pledged allegiance to the Islamic State group.

Advocates on both sides of the gun-control debate say California has some of the nation's strictest gun laws. It is one of six states to get the highest grade from the pro-gun control Law Center to Prevent Gun Violence.

The state's move to tighten them further comes amid years of gridlock at the federal level, which spawned a tense clash in Washington last week as Democrats camped out on the floor of the U.S. House and shouted down Republicans.

The bills angered Republicans and gun-rights advocates who say Democrats are trampling on 2nd Amendment rights, creating new restrictions that won't cut off the flow of guns to people intent on using them for nefarious purposes.

"On the eve of Independence Day, independence and freedom and liberty in California has been chopped down at the knees and kicked between the legs," said Sam Paredes, executive director of the advocacy group Gun Owners of California.

Lawsuits challenging the new laws are likely once they take effect next year, Paredes said.

Brown's action will require people who own magazines that hold more than 10 rounds to give them up. It extends a 1999 law that made it illegal to buy a high-capacity magazine or to bring one into the state but allowed people who already owned them to keep them.

In an attempt to slow gun users from rapidly reloading, the governor signed a bill outlawing new weapons that have a device known as a bullet button. Gun makers developed bullet buttons to get around California's assault weapons ban, which prohibited new rifles with magazines that can be detached without the aid of tools. A bullet buttons allows a shooter to quickly dislodge the magazine using the tip of a bullet or other small tool.

People will be allowed to keep weapons they already own with bullet buttons, which are often referred to as "California compliant," but they'll be required to register them.

Brown also endorsed a bill making another attempt to regulate ammunition sales after a law passed in 2009 was struck down by a Fresno County judge who said it was too vague. The new law will require ammunition sellers to be licensed and buyers to undergo background checks. Transactions will be recorded.

He also opted to require a background check before a gun can be loaned to someone who isn't a family member.

"Strong gun laws work. ... What we're doing in California is a better job of keeping guns out of dangerous hands," said Amanda Wilcox, a spokeswoman for the Brady Campaign to Prevent Gun Violence, whose daughter was killed by a shooter using a high-capacity magazine.

The governor vetoed an effort to expand a six-month-old program that allows courts to temporarily restrict gun ownership rights for people suspected of being dangerous and decided against restricting all firearm purchases to one per month, a limitation that already applies to handguns.

Another bill he vetoed would have asked voters to strengthen penalties for stealing a gun, which voters will already be deciding through Newsom's initiative. The ballot measure also will ask voters to require reporting of lost and stolen firearms - an idea Brown rejected Friday and has rejected at least twice before.

Newsom's initiative has put a spotlight on the lieutenant governor as he campaigns for governor in 2018. He's been at loggerheads with Senate President Pro Tem Kevin de Leon, a Los Angeles Democrat who tried unsuccessfully to persuade Newsom to drop the ballot measures in favor of legislative action.

Brown's vetoes protected Newsom's initiative from becoming moot. A spokesman for Brown, Evan Westrup, said voters "will have a chance to go even further in November, if they choose."