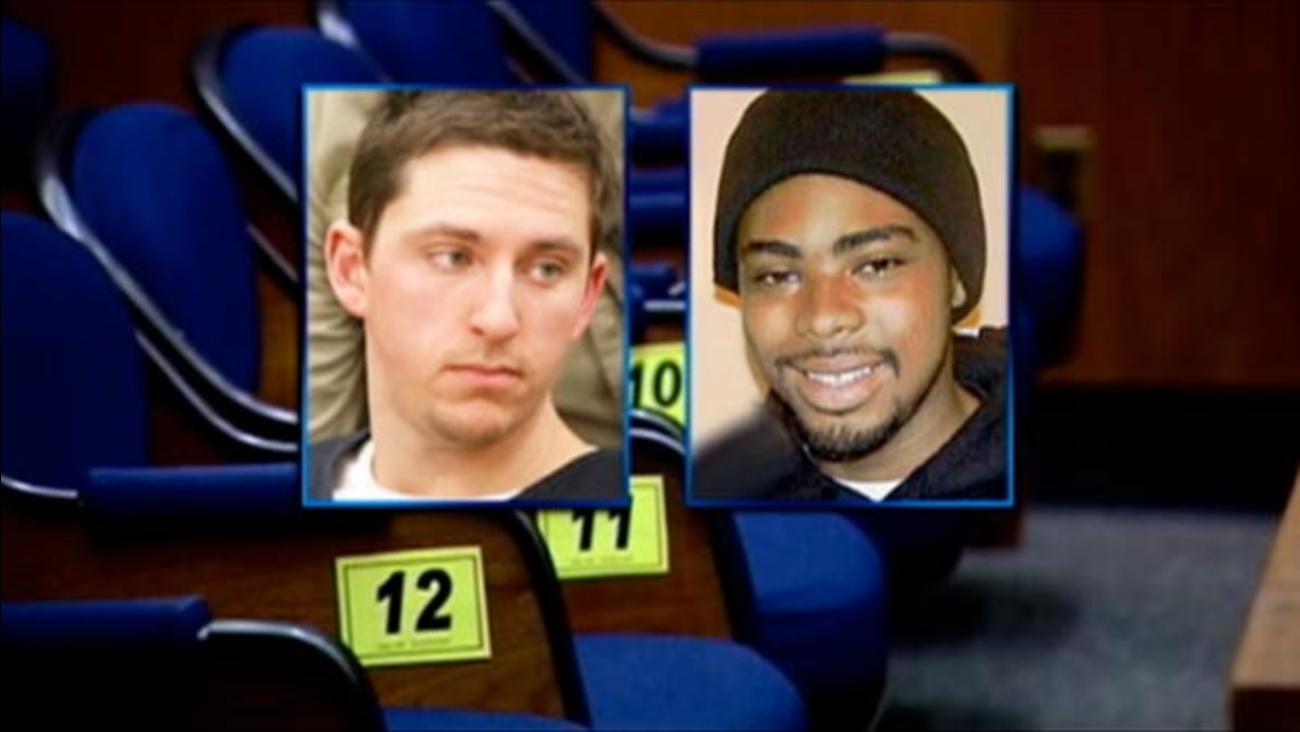 The jury begain deliberations Thursday around 8:30 a.m. They broke for a one-hour lunch just after noon. Around 2:10 p.m. they informed the court they had reached a verdict. The deliberations with the most recent jury panel totaled only seven hours over two days.

Mehserle sat stone-faced, looked forward and did not cry. His father was sobbing in the front row behind him. Mehserle put his hands behind his back minutes after the verdict was read, placed in handcuffs and taken away into custody. The judge had denied a request from the defense not to take Mehserle into custody immediately after the reading of the verdict.

The jurors sat serious and quiet as the verdict was read.

Grant's family was sitting in the second row behind the media in the packed courtroom. Grant's mother, Wanda Johnson, was visibly upset, shaking out of shear frustration.

Grant family attorney John Burris called the verdict a small victory, but also called it a "compromise verdict" and said it was a step backwards because "true justice" was not served.

"We are extremely disappointed with this verdict. The verdict is not a true representative of what happened to Oscar Grant and what the officer did to him that night. This is not an involuntary manslaughter case. This is a true compromise verdict that does not truly and accurately reflect the facts, and we are extraordinarily disappointed at that," Burris said outside the courtroom. "We believe this was a murder case, a second-degree murder. We are surprised that the jury came back as quickly as they did and seem to be very dismissive of the murder charge and the voluntary manslaughter."

Regarding the upcoming sentencing, Burris said, "He should be going to jail for the rest of his life, but yet he very well may get a sentence that does not even require him to go to jail, which would be the ultimate insult and travesty that I can imagine."

Grant's uncle, Cephus Johnson, said the family was disappointed. He said he didn't believe the jury looked at all the evidence, citing the short deliberation time.

"The family believes that Mehserle committed murder," said Johnson. "How the jury saw this and came to this decision is not understandable to me and the family."

Gov. Arnold Schwarzenegger today issued the following statement regarding the verdict, "I encourage Californians to remain calm in light of the verdict and not to resort to violence. I have spoken to Oakland Mayor Ron Dellums and have assured him we are well prepared to assist in maintaining order."

The U.S. Justice Department released a statement Thursday saying, "The Justice Department has been closely monitoring the state's investigation and prosecution. The Civil Rights Division, the U.S. Attorney's Office, and the FBI have an open investigation into the fatal shooting and, at the conclusion of the state prosecution, will conduct an independent review of the facts and circumstances to determine whether the evidence warrants federal prosecution."