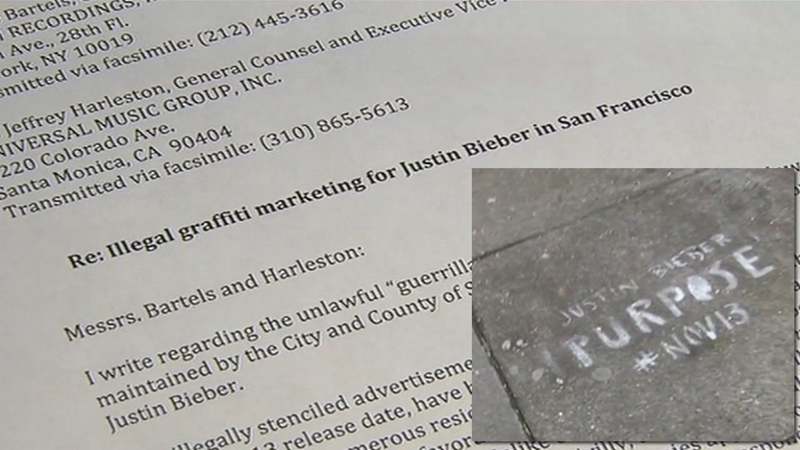 SAN FRANCISCO (KGO) -- Justin Bieber's latest album is topping the charts, but the promotional campaign has hit the wrong note in San Francisco.

The city attorney says the graffiti painted on sidewalks in various San Francisco neighborhoods to promote the album is illegal and shows contempt for public property. The guerilla marketing campaign is promoting Bieber's album "Purpose," which dropped Nov. 13.

The city wants Bieber's record label Def Jam and the distributor to not only say sorry, but to pay up for the clean up.

"I don't think that's something the taxpayers should have to pay for," Herrera said. "We want their full cooperation to know the extent of it, the individuals responsible for it, so that we can get it taken care of as quickly as possible."

His office is documenting the stencils which were spray painted back in November. Even the recent rains haven't washed them away. The city spends $20 million a year eradicating graffiti.

Supervisor Aaron Peskin is drafting legislation to increase fines on violators. "We can only charge the companies the cost of cleaning it up. And so for them, it's just the cost of doing business, so there has to be a larger disincentive to prevent this kind of lawless behavior," Peskin said.

The city attorney can sue, but would like to hear back from Bieber's people. ABC7 News has also not received a comment from Bieber's representatives.