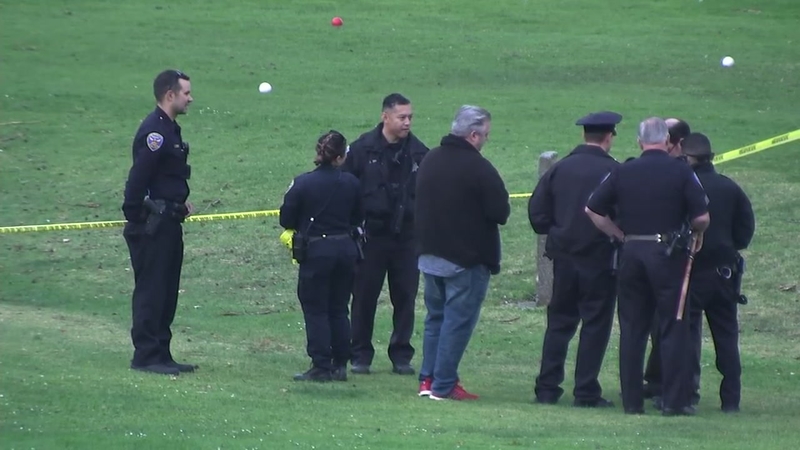 Golfers ABC7 talked to told us they heard it may be a baby's body, but authorities cannot confirm that.

Around 2:19 pm officers responded to Lincoln Park Golf Course after receiving reports about a body on the green.

DEVELOPING: SFPD and a coroner van are at Lincoln Park Golf Course for a reported body found on the green. SFPD says homicide detectives are on their way @abc7newsbayarea pic.twitter.com/ouR7OTnp8b

Homicide detectives were called to the scene.

The only details released by San Francisco Police Department are that they are investigating a "suspicious death."

Police say the medical examiner is evaluating the remains for a possible cause of death. It is too early in the investigation to determine the age or gender.

Andrew O'Rourke was golfing in a group of four when they came across the scene. "We came around 13/14. Before we teed off we noticed there was an odd smell," O'Rourke said. He stayed at the scene to talk to investigators. "No one wants to play after seeing something horrific like this," O'Rourke said.

Officer Grace Gatpandan says this is a popular area. "Because this is a well populated area and there's a lot of trails in this area, if anyone saw anything suspicious around that time (2:19pm) please give us a call. You might not know what is important to the investigation," Gatpandan said.

Investigators ask that if anyone saw something related to this incident, or has any information, to please call SFPD's tip line at (415)575-4444. You can remain anonymous.

NEW: SFPD confirms they’re investigating a “suspicious death” but no further details. Police say the medical examiner will take over the remains & notify them on what they found. PD got the call at 2:19 this afternoon & are asking if anyone saw something call.@abc7newsbayarea pic.twitter.com/xOeR28oXQi