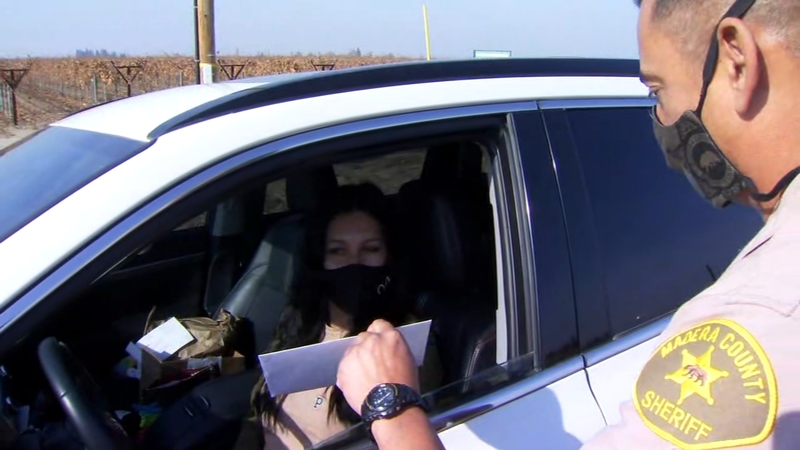 FRESNO, Calif. -- Just the thought of getting pulled over by law enforcement brings out anxiety in all of us.

But what if instead of a ticket, the officer or deputy handed you cash?

That's exactly what happened today for some deserving drivers in the North Valley.

Madera County deputies hit the streets to hand out cash to some unsuspecting drivers in what they call "Operation: Random Acts of Kindness."

"So often, the law enforcement deals with people on some of the worst days of their lives. This is just a great opportunity to not only spread some holiday cheer but to get to know the people we serve," said Sheriff Tyson Pogue.

"For kids, this is the greatest time of the year because they're going to get gifts but they don't realize parents are struggling, especially now with COVID. It's making it hard for a lot of families," Deputy Jose Iniguez.

We rode along as deputies searched for drivers committing minor infractions.

"The reason I pulled you over was for tinted windows," said the deputy.

But instead of a citation drivers were handed a Christmas card with money inside. Jessica Gutierrez was so moved by the unexpected gift she was reduced to tears.

"You just made my day because I was having a really bad day," said Gutierrez.

"I really appreciate it," said Gutierrez.

"I"m grateful-- I was just saying how we moved into a new house and all of our money went to that and then we found out I'm expecting a baby. I'm five months pregnant," Mireya Castillo.

"I appreciate it, this will help a lot. I'm very happy, It makes Christmas a little better for me," said Perry Kwock.

A San Francisco Firefighter dropped off a $10,000 check Thursday morning at the San Francisco-Marin food bank, money she raised from selling t-shirts and masks.