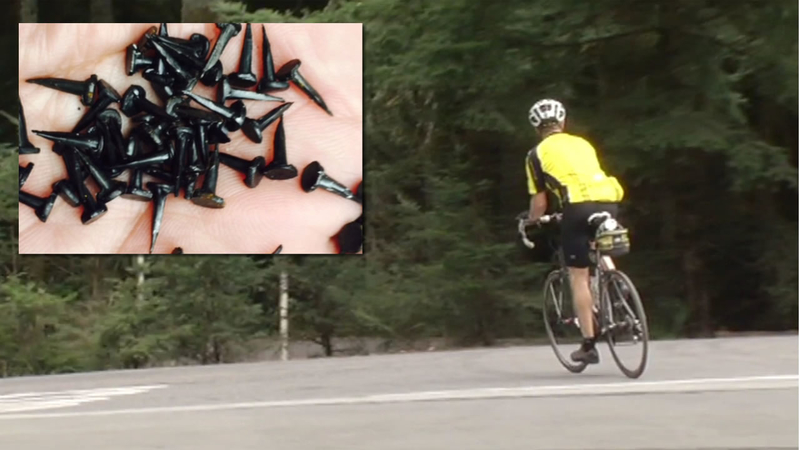 SAN MATEO COUNTY, Calif. (KGO) -- Bicyclists on the Peninsula say someone has been trying to sabotage their rides by laying out metal tacks.

The incident is happening on Kings Mountain Road in San Mateo County and the riding community is now fighting back.

Andrew Hsu is a member of the cycling club that had eight riders get flat tires on Kings Mountain Road last week. It ruined the ride, but no one was hurt.

"Once the tacks get embedded, sometimes it takes a while for the tires to deflate and it could be a while before you realize and if you're going at a high speed at that point it's very easy to lose control of the bike with a high speed crash," Hsu said.

What's most disturbing about last week's incident is that it seems someone carefully planted the the tacks along the roadway.

"Somebody had placed the tacks pointy side up inside a crack in the road, so that they were there affixed, pointed up and guaranteed to get flats," said Walter Cook, a Woodside resident.

Cyclists have been getting their tires taken out by these tacks for years and the California Highway Patrol and San Mateo County Sheriff's Office have been told, but no arrests have been made.

King's Mountain Road is popular with bicyclists, drivers, motorcyclists, even equestrian riders. The bicyclists who spoke with ABC7 News say, whoever is laying out those tacks is making this dangerous for everyone.

Walter Cook says something more needs to be done, so he's raising a $10,000 reward.

"This is a sabotage that is putting people's lives in danger. It is a serious problem and something has to be done about it," Cook said.