"It barely keeps up with the cost of living."
KGO
By Amy Hollyfield 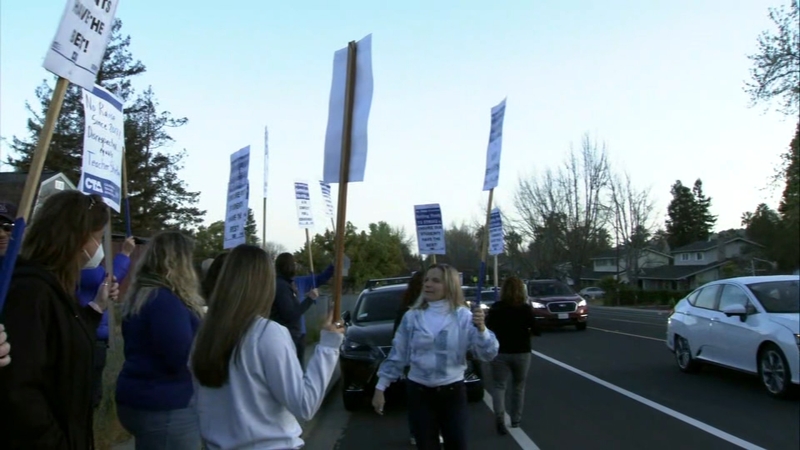 WALNUT CREEK, Calif. (KGO) -- Teachers in the Mount Diablo School District took to the picket line Friday not to strike, but to show they are serious about striking if need be.

"It feels exciting. There is a lot of energy out here. We call this a getting ready to strike awareness campaign. To let the community know that we are ready to do what it takes to get fair wages for our teachers," said Northgate High School teacher Karen Jenkins.

They chose Friday to picket because the neutral fact finding panel will start looking into the negotiations and is expected to present non-binding recommendations next week.

"We are hoping the fact finding panel will find what we have seen all along: that there are funds to support, that it is a prioritization of the funds," said chemistry teacher Kevin Taylor.

RELATED: Union reps reach agreement with SFUSD on underpayments to educators, but not without hit to morale
EMBED More News Videos

After three nights of camping out in San Francisco Unified School District headquarters, teachers' union reps say they have reached an agreement.

Superintendent Adam Clark says he agrees the teachers need a raise, but says school districts all over California are going to need some help from the state in order to meet teachers demands.

"School districts are woefully underfunded. The way that our dollars are allocated to us does not allow us to use our total dollars to fund salaries."

Referring to the state's surplus, Clark went on to say "There is money. They have to change how they structure the funding of public education. And there is traction being made at the state level on this. But that won't help us on what we are trying to solve today."

Teachers say they aren't asking for much. They want a 12.5% salary increase spread out over six years.

"It barely keeps up with the cost of living. We haven't had a raise in three years," Taylor said.

"We think it is very reasonable. We haven't had a raise since 2018. So when people say 'oh they are asking for 12%' we are looking at six years -that comes to about 2.02% a year. We think it is totally reasonable," Jenkins said.

She added "We feel there hasn't been a fair attempt at compensating us reasonably. I am out here after 20 years of saying enough is enough."

But the superintendent says money is so tight, the school board already made a round of budget cuts just weeks ago.

"The board made the painful decision to cut 10 million dollars from our budget. Included in there-dozens of teachers were laid off, classified staff were laid off, we cut 4th grade music," Clark said.

Hundreds of teachers in the Cotati-Rohnert Park Unified School District in Sonoma are expected to go on strike Thursday to demand better living wages.

He says meeting these salary demands would mean more cuts.

The district is offering a 7% raise.

"I've stood by our numbers all along. We have some real challenges in this district. We have declining enrollment, we have lost hundreds close to thousands of students because schools were closed during the pandemic and we couldn't open them back up."

Teachers say they do not want to strike but if they do, it could happen as early as March 28.