'It was pandemonium': Neighbor describes aftermath of Los Angeles house explosion that was caught on camera 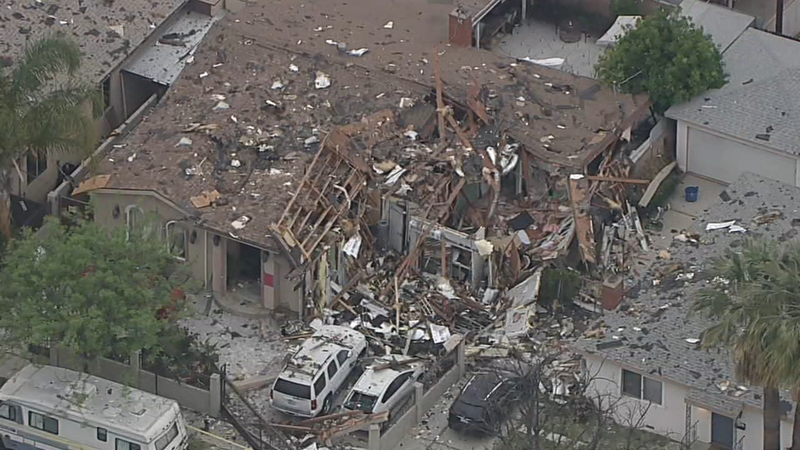 VALLEY GLEN, LOS ANGELES -- An explosion possibly caused by a gas leak at a Valley Glen home -- which left two people injured, including one critically -- led to a chaotic scene throughout the neighborhood as residents' homes were rocked by the blast.

A neighbor's surveillance camera captured the blast from the explosion, which residents described as a bomb going off. The video shows the blast briefly lighting up the street Sunday night and rocking the area, causing car alarms to sound.

"I was just sitting there watching T.V., my wife was outside on the patio, and it all happened so fast," he said. "It felt like a -- first I thought it was an earthquake, but then all my windows in my house blew out. I looked outside, I heard people screaming. I told everybody, 'You better get away from the house, but there were people trying to get the other people inside the house. People were crying, their dogs were running around the neighborhood. I mean, it was pandemonium."

Debris still covered many parts of the street Monday morning as authorities continued to investigate the cause of the explosion that was reported just before 9:30 p.m. in the 12700 block of West Archwood Street.

The Los Angeles Fire Department said there were no active flames when firefighters arrived at the one-story, single-family home. The roof of the home was found on a lawn two doors down and the blast leveled the garage.

There were seven people home at the time, including three children, but only two adults sustained significant injuries.

A man around 59 years old was brought to a local hospital with critical burn injuries. A second man, around 46 years old, was pulled from a pile of shoulder-deep debris and was talking to firefighters at the scene. He was then transported to a hospital with non-life-threatening injuries.

Another man suffered minor injuries and declined to go to the hospital. A woman, around 65 years old, and the three children at the home were not injured.

One woman who lives in a nearby home was also evaluated for injuries and declined to go to the hospital.

The fire department says firefighters detected gas in the air and were able to secure the leak. The gas company also provided assistance.

A witness who was driving by the area recalled hearing the explosion.

"We were in the car a few streets down and we just heard this big, loud explosion," she said. "I thought it was a firework or a gun shot."

She drove closer and came upon a stunning scene.

"We saw the whole ceiling blew off and it smelled like gas," she said. "I figured it was a gas leak. The firefighters got here quickly."