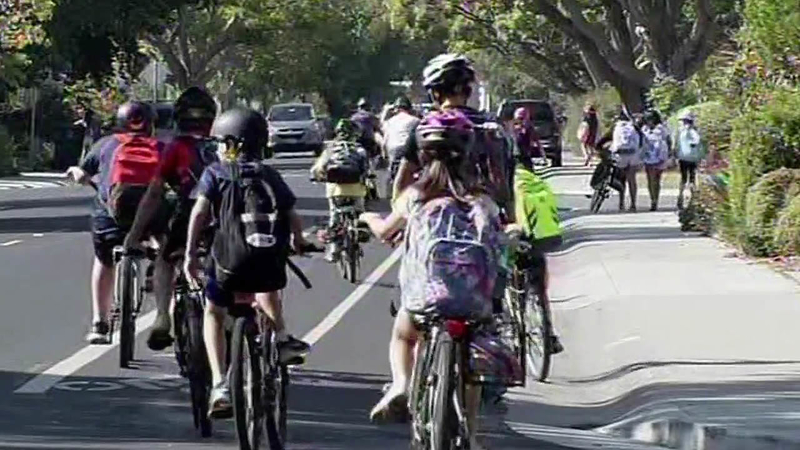 PALO ALTO, Calif. (KGO) -- More traffic cameras are going up in Palo Alto, but this time they are going to be focused on kids on bikes.

Jordan Middle School will be one of nine Palo Alto schools where the cameras will be installed. There will be a total of 45 cameras in all and they will be low-resolution because the goal is to count kids on bikes, not to capture their faces.

The cameras will be mounted on city-owned utility poles as a way to track how many students ride their bikes to and from school. It's part of a congestion relief program to reduce the number of cars on city streets.

"We want to see whether our programs are working and whether we have more people walking or biking to school this year than last year. And if we're not, what's going on?" Jessica Sullivan, Palo Alto transportation planning manager, said.

The city did a one-time count of bicycles stowed inside cages at the schools. They came up with 1,000 but now they will know how time of year, weather and other factors may impact ridership.

Eduardo LLach, a resident who lives across from Palo Alto High School, thinks the camera counting is a good idea. He said, "Having cameras, so that they can figure out what's going on and so they can improve the throughput of kids getting back and forth, will be a very good idea."

The video captured will not be stored.

Eighty percent of the $100,000 cost is coming from federal transportation funds. The Valley Transit Authority administers the funds in Santa Clara County.

"We're not only training young kids to look out for vehicles while they're going to their destinations, but it's about bringing awareness to the driving population," Brandi Childress from the Valley Transportation Authority said.