By by ABC7News.com staff Contra Costa County CHP officer Thomas Westropp-Bennett is pictured with a man he saved from jumping off the Benicia Bridge on Nov. 17, 2016. (CHP/Twitter)

BENICIA, Calif. -- Contra Costa County CHP officer Thomas Westropp-Bennett is is hailed a hero after saving a man on the Benicia Bridge.

CHP says officers responded to a call of a man who appeared distraught on the ledge of the Benicia Bridge Thursday afternoon. They say he was contemplating suicide by jumping off the bridge and officer Westropp-Bennett began talking to the man, attempting to get him down.

CHP Contra Costa posted about the incident on their Facebook page:


Many are calling Westropp-Bennett a hero on social media.

The man was taken to a local hospital for treatment.
Related topics:
beniciachpsuicidepolice
RELATED
Hero Cop Took on Kansas Gunman While Being Fired Upon 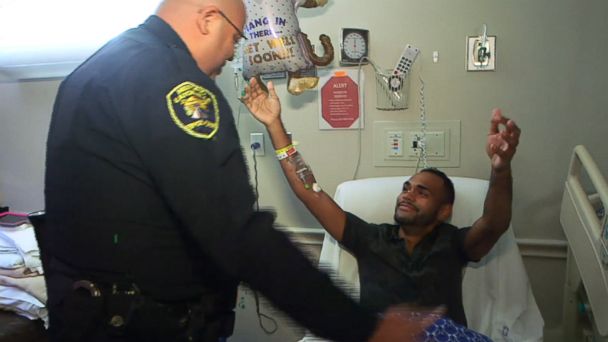