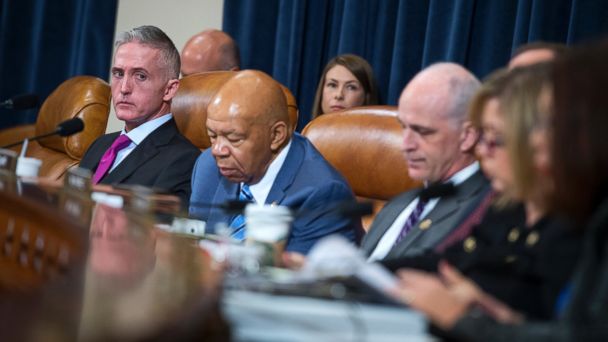 House Republicans on the Benghazi Select Committee released their long-awaited report this morning on the events surrounding the 2012 Libya terrorist attacks that killed U.S. Ambassador Chris Stevens and three other Americans.

The report says there was intelligence leading up to the attacks that the diplomatic consulate and CIA annex there were not safe and that top officials in the U.S. State Department, including Hillary Clinton and Under Secretary Patrick Kennedy, should have realized that.

It is also critical of top officials' deliberations during the attacks and the lack of troop mobilization as it unfolded.

In one detail revealed in the report, a U.S. military unit mobilized after the attacks changed in and out of their uniforms and civilian outfits four times. The report also concluded that none of the military forces mobilized met required deployment timelines.

Clinton had planned a visit to Libya in 2012, but it was canceled after the attacks, according to an email obtained by the committee.

Eighty new witness accounts, including nine eyewitnesses never interviewed before, will be included in this final congressional report on Benghazi. In all, the committee logged over 16,000 pages of transcripts.

The report refutes some findings of the previous investigations and focus on the fact that the administration initially blamed the attacks on an anti-Muslim video.

"Benghazi, Libya, was a terrorist haven and so those folks who were involved in not protecting these Americans certainly should be held accountable," committee member Rep. Mike Pompeo, R-Kan., told ABC News in an interview. "The folks who told a wolf tale, a lie in the aftermath of the attacks who told the American people a political tale about a YouTube video ought [to] also be accountable."

The report described how officials, including Clinton, focused on the video in a high-level meeting the evening of the attacks.

Democrats on the committee were not allowed to co-author this new report but issued their own findings Monday: a 339-page report that they say dispels "conspiracy theories" about the attacks. In it, they quote former CIA Director Gen. David Petraeus, who testified to the committee he was still uncertain of what exactly motivated the attackers to storm the diplomatic compound.

"There is a reason Republicans leaked pieces of their report in the middle of the night and continue to hide it from Democrats even now. They don't want us to fact-check it against the evidence we obtained," a Democratic spokesman for the committee said early today. "Based on press reports, the Republican Benghazi report seems like a conspiracy theory on steroids, bringing back long-debunked allegations with no credible evidence whatsoever."

Brian Fallon, a Clinton spokesman, blasted the committee on Twitter after the report's release, calling it a "partisan sham."

The select committee, formed just over two years ago, is the eighth congressional committee to investigate the attacks. Its investigation is the 12th on Benghazi.

The panel has attracted partisan controversy since its formation. It was approved in a near party-line vote in the House in May 2014.

It is credited with uncovering Clinton's use of a private email server as secretary of state, which was discovered as the committee looked into correspondence between Clinton and her team after the attacks on the U.S. consulate in Benghazi.

That discovery, first reported by The New York Times, prompted an FBI investigation into Clinton's handling of classified information on the server, which has dogged her presidential campaign.

Democrats - who have long criticized the two-year, $7 million investigation (the cost of which they partially contributed to) - have accused Republicans of using the panel to target Clinton because of her White House run, seizing on comments made by House Majority Leader Kevin McCarthy, R-Calif., last fall as he considered a run for House speaker.

"Everybody thought Hillary Clinton was unbeatable, right? But we put together a Benghazi special committee, a select committee," he said in a Fox News interview - comments he later walked back. "What are her numbers today? Her numbers are dropping. Why? Because she's untrustable."

After McCarthy's comments, Committee Chairman Rep. Trey Gowdy, R-S.C., said in an interview with CBS that he told Republican colleagues and friends to "shut up" about the investigation. In the panel's 11-hour interview of Clinton, he told the former secretary of state that the investigation was not about her but about the four U.S. victims of the terrorist attacks.

Republican Reps. Mike Pompeo of Kansas and Jim Jordan of Ohio have authored a supplement to the committee's report with Gowdy's approval that accuses Clinton and top administration officials of knowingly misleading the public about the nature of the attacks before the 2012 presidential election. The members also claim that the administration "never launched men or machines" to Benghazi during the attacks.

"We cannot say whether the military could have saved lives in Benghazi. We can say with certainty that our nation's leaders did not move heaven and earth to send military help with the urgency that those Americans deserved. We will never know if a more vigorous, comprehensive and urgent response could have saved lives," their appendix reads.

Previous investigations into the attacks have determined the military did all it could that night given the constraints of time and distance.

Accusing the majority of shutting them out of the drafting and interview process, Democrats released their own report Monday, which "debunks many conspiracy theories about the attacks." The report found that administration officials did not "make intentionally misleading statements" about the origins of the attacks but were relying on information provided under "fast-moving circumstances."

Democrats have also determined Clinton did not personally deny requests for additional security on the ground in Libya leading up to the attacks.