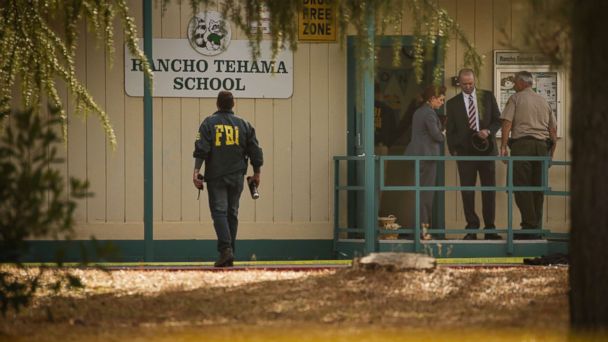 The assailant who went on an apparently random shooting rampage in a remote area of Northern California on Tuesday was armed with a semiautomatic rifle and a military-style vest with clips, according to police.

Four people were killed, and 10 others were injured on Tuesday morning after the gunman rampaged through rural parts of Tehama County for 45 minutes, according to police. The gunman was killed by police after a chase.

Authorities had not revealed the gunman's identity as of early Wednesday, but police said he had prior contacts with law enforcement over a domestic violence episode. He was also charged with assault in January and had a restraining order placed against him, according to Johnston.

Police recovered a semiautomatic rifle and two handguns belonging to the suspect, along with a military-style vest with clips attached to it. An additional weapon was found in his crashed vehicle.

Police said they will identify the shooter after his relatives are notified.

The shootings took place in seven locations, including at the Rancho Tehama School, an elementary school in Corning, about 130 miles north of Sacramento, but no children were killed, police said. Police said surveillance video shows that the shooter attempted to enter a local elementary school after quick-thinking school officials placed the building on lockdown.

The gunman shot and killed two neighbors he had been feuding with, and then he got into his pickup truck and began to randomly shoot more people, according to The Associated Press.

"It was a bizarre and murderous rampage," Tehama County Assistant Sheriff Phil Johnston said at a press conference Tuesday afternoon. "I think the motive of getting even with his neighbors - and when it went that far, he just went on a rampage."

The suspected shooter was "engaged by our officers shortly after our arrival" and was shot dead at the scene, Johnston added.