KGO
SAN FRANCISCO (KGO) -- San Francisco police are looking for a couple that's allegedly been tagging the fashionable Cow Hollow neighborhood and the Richmond District. And they have some very clear surveillance pictures to work with.

The images are clear as day.

"We believe that he is familiar with the area and may be a resident of the area," said SFPD Officer Grace Gatpandan. "And so we're hoping anyone who sees this surveillance footage or sees a photo of the suspects that they can identify him."

The video from the security camera perched at the entryway of the Laverne apartment building on Greenwich and Fillmore.

The clean cut young man and woman are seen in the video tagging the walls of the doorway.

It's right across the street from venerable Balboa Cafe and next to Plumpjack Liquor store.

Police believe they're responsible for a bunch of graffiti in upscale Cow Hollow and the Richmond. Photos show more graffiti at 10th and Geary and on 12th and Geary there was another nasty one.

"It's just a disgrace," said Cow Hollow resident Peter Westmenhiser. "It's not good for the neighborhood."

Westmenhiser lives in the neighborhood a building near him just got tagged.

SFPD actually has an anti-graffiti unit. They urge the public to call if you know the couple. They may also be charged with a hate crime.
Related topics:
san franciscocow hollowrichmond districtcrimegraffitisfpdpoliceinvestigationcaught on camerasurveillance video
Copyright © 2020 KGO-TV. All Rights Reserved.
GRAFFITI 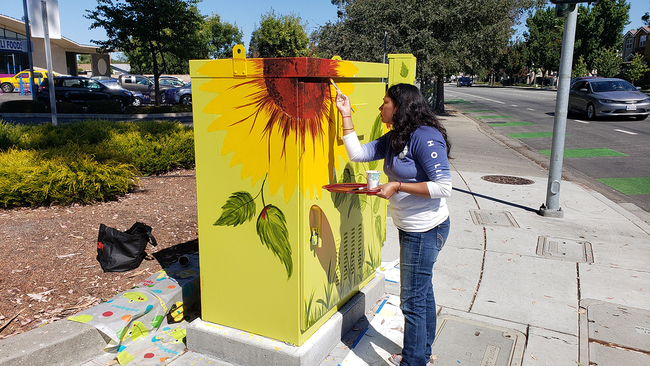