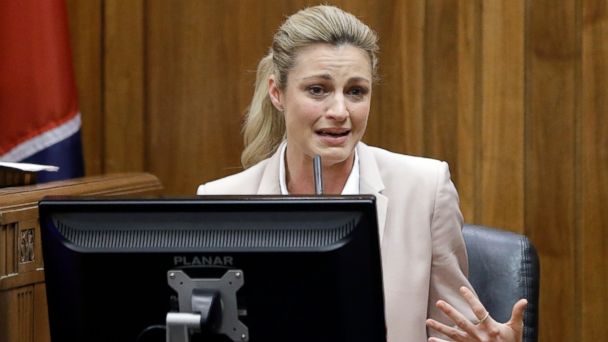 ABCNews
By MEGHAN KENEALLY
Sportscaster Erin Andrews took the stand for a second day in her civil suit over a secretly recorded video showing her naked, saying this morning how she received treatment for her emotional trauma and detailing how the incident has affected her romantic relationships.

The "Dancing With the Stars" co-host did not explicitly name her boyfriend, Jarret Stoll, in her testimony, but confirmed she is dating a professional hockey player for the Minnesota Wild. Stoll plays for the team.

Andrews, 37, testified as part of a $75 million lawsuit against the operator of the Nashville Marriott at Vanderbilt University where Michael David Barrett altered the peephole to her hotel room and recorded a video of her that he subsequently released online in 2009.

She was staying there while covering a football game for ESPN, which is owned by the same parent company as ABC News.

West End Hotel Partners, which operates the Nashville Marriott, has said that Barrett's criminal actions were his responsibility, not theirs.

Andrews testified today how she was set up with Stoll by her colleague Michael Strahan, who is the co-host of ABC's "Live With Kelly and Michael."

"[Strahan] said, 'I have a guy I'd like to take you out to dinner' and I looked him up and I said, 'Eh, I'm not interested, I don't need that in my life right now,'" Andrews said.

Andrews got choked up talking about how her "baggage" from the video has affected her romantic life.

"I feel really guilty he [Stoll] didn't know me before this happened and to try to explain to someone who has questions about why I have trust issues, why I'm insecure, why I'm embarrassed; he doesn't understand," she said.

"I feel sad because I think he would have loved the girl more that was there before this happened and I feel very guilty about that I want to be the cool sports reporter, 'Dancing With the Stars' host. I don't want him to see this," she said through tears.

She also talked about how she hopes to start a family, but dreads addressing the situation with any eventual children and grandchildren.

On Monday, the Nashville court also heard testimony from Andrews, as well as her mother, Paula Andrews, who talked about her daughter's reaction when the video was first posted online..

Barrett was sentenced to 2.5 years in prison after being arrested in 2009 and his taped testimony about how he found out the room where Andrews was staying and how he used a hacksaw to remove the peephole was played for the court Monday.