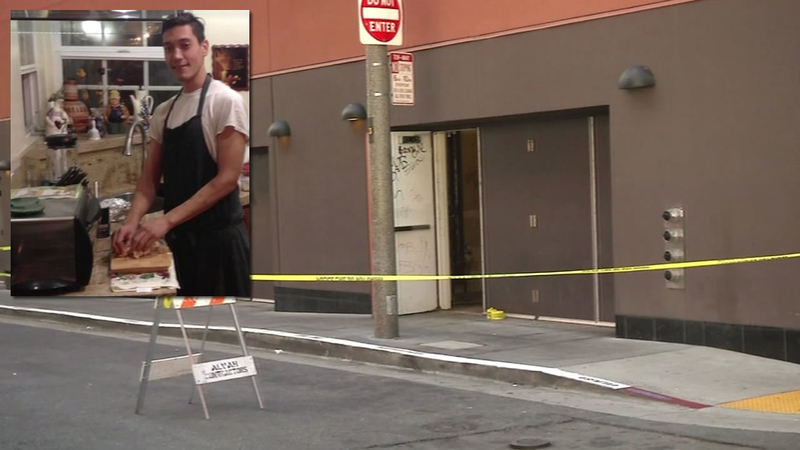 SAN FRANCISCO (KGO) -- The family of a San Francisco chef found dead in a private stairwell at the Westfield San Francisco Centre is in San Francisco from Los Angeles. They are retracing the victim's last steps in an attempt to figure out how he died.

The Galicia family picked up their brother Frank's belongings from Sons & Daughters, the upscale restaurant where he worked.

"He was on his way from Boston, didn't really give us an option. Said he was going to show up in two days, showed up, cooked for a night and we hired him right on the spot," said Sons & Daughter's owner Teague Moriarty.

Frank didn't show up for work Wednesday afternoon. Earlier that morning, a maintenance worker discovered Frank's body in a private stairwell connected to the Westfield mall. The San Francisco Police Department is calling his death a homicide.

"It's a violent death of a friend who is young," said Moriarty.

"We're all awestruck, we're just shocked," said Frank's brother Louis Galicia. "Knowing what happened is what we need to know."

That deep desire to know is what brought Frank's brother to the alley by the mall where his body was found in the stairwell.

"Trying to gather any information from his perspective. It's a cocktail of emotion anger, sadness, anxiety and frustration," said Galicia.

Louis held the door open to Bloomingdale's for two men. Minutes later they exited the private stairwell where Frank was found. A security guard looked out shortly after. The men told Louis Galicia they got into the stairwell through the mall food court.

"Just coming here makes me want to dig deeper and hoping that San Francisco police are really on it because something has to be done," said Galicia. "Someone must have seen something and we need their help."

Louis is hopeful one of these many surveillance cameras picked up something. He's also asking anyone with information to contact police.