How Indiana's 'Religious Freedom' Law Compares to Other States 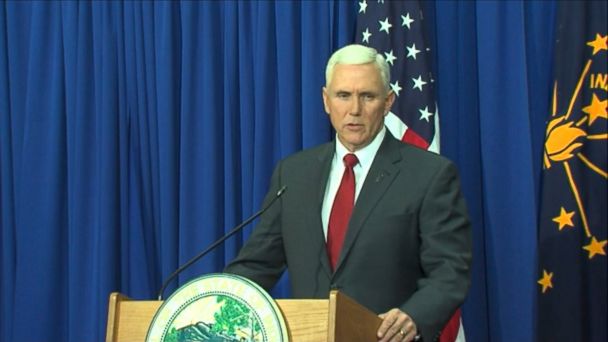 Gov. Mike Pence and other supporters of Indiana's "Religious Freedom Restoration Act" have made a simple point in defense of their law -- that a slew of other states, plus the federal government, have the same law on the books and that Barack Obama as a state senator voted for it in Illinois.

In Arkansas, meanwhile, Republican Gov. Asa Hutchinson said he would not sign his state's "Religious Freedom Restoration Act" until the legislature changed it to more closely mirror the federal law.

So what's the difference between all the rest of the laws -- on the federal books and in 19 other states -- and the two more recent, similar bills in Indiana and Arkansas?

Opponents and observers make a few major cases for why these two new laws are different from the rest.

"This bill is substantively different," said Adam Talbot, spokesman for Human Rights Campaign (HRC), the D.C.-based gay rights group. "It is the broadest and most dangerous legislation of its kind."

Into the weeds we go: The federal law signed by President Bill Clinton, and the similar Religious Freedom Restoration Acts (RFRAs) in 19 other states, do not say they apply to corporations, according to gay-rights advocates. Instead, they apply to people.

The laws say the government has to prove a higher standard of government interest in applying laws that may infringe on a person's free exercise of their religion. In Indiana, SB 101 also included "corporations" in the list of entities that can sue.

After the Supreme Court ruled in its Hobby Lobby decision that "closely held" corporations can act on religious beliefs, it's unclear whether other RFRA laws about individuals now also apply to corporations. But in Indiana, that definition has been expanded beyond the narrower definition in Hobby Lobby to include all corporations and associations.

"We want certainty under this law," said Travis Weber, director of the Center for Religious Liberty at the socially conservative Family Research Council, explaining why supporters of the bill want that corporate application included. "We want this to be resolved in our law, so we're going to specifically define 'person' as businesses."

Of the 19 states with similar laws, only Indiana's and South Carolina's statedly apply to corporations, according to a quick ABC review of all the laws.

2. IN SOME OTHER STATES, NONDISCRIMINATION LAWS TRUMP 'RELIGIOUS FREEDOM' LAWS

"If there is a nondiscrimination law" already on the books, says Lambda Legal National Law and Policy Director Jenny Pizer, "that law should be enforceable and enforced notwithstanding any religious claim."

But Indiana has no statewide law barring discrimination based on sexual orientation, and only a handful of its counties have nondiscrimination laws at the local level. According to Pizer, that means there's no protection from discrimination by companies-where in some other states, there is.

Four states, among the 20 that have RFRA laws, also have statewide laws that protect from sexual-orientation discrimination, per the Human Rights Campaign. In other states, pro-gay-rights legal advocates have sought to get courts to interpret sex-discrimination laws as applying to cases involving sexual orientation, but that's not always a lock.

"We haven't seen that play out in the context of sexual orientation nondiscrimination," said Weber. "It has not been played out at a definitive level yet."

Anti-discrimination lawsuits are often interlaced with other constitutional rights, so it's tough to say definitively whether wedding vendors are allowed to deny services to gay couples, for instance, in other states that don't have statewide anti-LGBT-discrimination statutes.

3. THE POLITICAL CONTEXT IS DIFFERENT, AND SO ARE THE POLICY AIMS

Indiana's top two Republican legislators denied on Monday that SB 101 was a consolation prize for social conservatives after a failed effort to ban gay marriage in the state. They also said it wasn't intended to have anything to do with denying services to gays and lesbians.

The other side sees things differently, but it's clear that the context was different when Bill Clinton signed the federal bill-proposed by then-congressman Chuck Schumer, now a longtime Democratic senator from New York-into law in 1993.

The 1993 law is seen as a response to a 1989 Supreme Court ruling, Employment Division v. Smith, against two Native American drug-rehab counselors who had taken peyote, defending that action by saying it was in keeping with their religion.

That ruling, Pizer said, led to a liberal-supported push to for a "religious freedom" law that would protect the exercise of minority religions. The focus was not Christianity, necessarily.

In a later Supreme Court case, that federal law was ruled not to apply in state courts, so states began passing laws of their own.

The gay-rights movement was smaller in those days, and gay marriage was less common and not legally recognized, so the idea of preventing Christian bakers from having to serve cakes at gay weddings wasn't really on the radar.

"The president himself has said that his views on this have evolved," said Ted Ruger, dean of the University of Pennsylvania Law School, pointing out how dramatically the politics and policies surrounding gay marriage has evolved over the last 10 to 15 years.

"The issue of the wedding photographer, or the wedding-cake maker, was just not an issue until the last five years, so that's the fundamental difference," Ruger said.

In declining to sign his state's Religious Freedom Restoration Act, Hutchinson pointed out that the bill differed from federal law in that it applied to private disputes, not just governmental action.

Indiana's law is the same way. While other state's RFRA laws make it more difficult for the government to enforce laws when those laws incidentally infringe on religious beliefs, Indiana's applies to disputes between people, or between people and businesses.

Gay-rights advocates make that point, raising the idea that for this reason, Indiana's law more directly applies in cases where a private company denies services to a private individual.

A clause in Indiana's SB 101 states that the law applies "regardless of whether the state or any other governmental entity is a party to the proceeding"--in other words, it could apply in private, civil suits.

Olivia Smith contributed to this report.