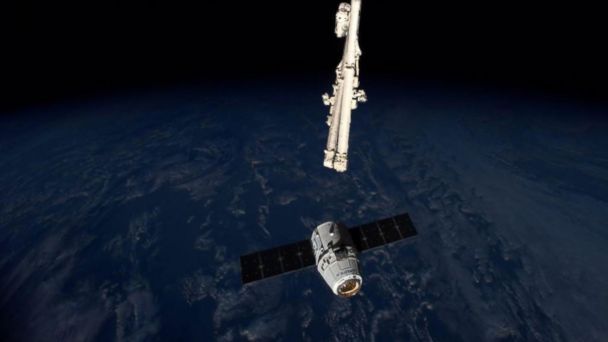 Twenty rodents were among the cargo that arrived at the International Space Station today aboard the SpaceX Dragon capsule.

The reusable Dragon spacecraft, which is on its fourth cargo re-supply mission to the orbiting station, docked this morning at the ISS, where it will spend the next four weeks before splashing into the Pacific Ocean, SpaceX officials said.

The trip marked the first time Dragon carried live mammals, which will live in NASA's Rodent Research Facility where researchers will study the long-term impact of weightlessness on their bodies.

Also on board was the first 3-D printer launched into space. It could potentially crank out spare parts that will allow astronauts to one day fix their vessel on the spot.

Dragon arrived at the ISS with a total of 5,000 pounds of cargo, including science experiments, crew supplies and spacewalk equipment, according to NASA.

When it's time to return to Earth, Dragon will loaded up with cargo to be sent back to Earth. Once the capsule is released, it will perform three burns to send it on a path away from the ISS.

SpaceX projects that five hours after leaving the ISS, Dragon will conduct a de-orbit burn, lasting about 10 minutes. The capsule will then take about a half hour to re-enter Earth's atmosphere before splashing down into the Pacific Ocean, about 380 miles off the coast of California, where it can then be retrieved for future missions.