This all started when officers were called to McDonald's house for a noise disturbance, but it quickly turned into something more serious.

Police have released audio of the dispatch call. In it, the dispatcher is heard saying, "Her fiance was hitting her, they're at this address. He was trying to pull her out of the house, she's 10 weeks pregnant and refusing medical."
San Jose police Sgt. Heather Randol declined to discuss the circumstances that led to McDonald's arrest, saying only that officers had probable cause to take him into custody.

It's not yet clear how many people were still at the house when the call came in just after 2:30 a.m. in the morning, but neighbors tell ABC7 that other members of the 49ers were at the party.

Defense attorney Steve Davidson says that means the other players are part of this investigation. "If witnesses are intoxicated they give conflicting accounts. But in a high profile case like this, the police are going to be under pressure to get it right and I'm sure they're going to want to talk to everyone at the party."

Davidson specializes in domestic violence cases. He says the police have clear rules on making an arrest, but the district attorney's office will have a have other considerations before moving this case forward. "Just because Ray was arrested doesn't mean he will be charged," explains Davidson.

The 49ers and the NFL will be under close scrutiny because this is the first case since commissioner Roger Goodell described new, tougher penalties for anyone involved in domestic violence. In a letter to all team owners last Thursday, it describes for a first offence, players could be suspended for six games - tougher sanctions for cases involving violence against a pregnant woman. Players face a possible lifetime ban from the NFL for a second offense.

The Sacramento Bee reports this was a birthday party for McDonald as he turns 30 on Tuesday. The newspaper says Mcdonald's fiance showed officers bruises on her neck and arm and he was arrested without any further incident on felony domestic violence charges.

McDonald was later released from Santa Clara County Jail after posting $25,000 bail. He wouldn't discuss what happened with television news reporters who approached him after he posted bail. "I can't say too much, not right now, but the truth will come out. Everybody knows the kind of person that I am," McDonald said. "I'm a good-hearted person."

General Manager Trent Baalke released a statement saying, "The 49ers organization is aware of the recent reports regarding Ray McDonald and we take such matters seriously. As we continue to gather the facts, we will reserve further comment."

McDonald has been playing for San Francisco since he was drafted as a third-round pick in 2007.

The incident is the latest blow to what has been one of the NFL's fiercest defenses. On Friday, 49ers linebacker Aldon Smith received a nine-game suspension for what the league called violations of its substance-abuse and personal-conduct policies.

McDonald was arrested is the same home where 49er Aldon Smith had been partying last September before getting involved in a single vehicle crash just down the street and then getting arrested for DUI. The Sacramento Bee reports other 49ers players such as Vernon Davis and Marcus Dobbs attended the party.

There have been 10 arrests involving 49ers players since 2010; Four of those arrests have been this year. In January, Daniel Kilgore was charged with public intoxication in Tennessee. In March, Chris Culliver was arrested on misdemeanor hit-and-run charges. Police arrested Aldon Smith in April after officers say he made a bomb threat while at LAX. Those charges were eventually dropped. 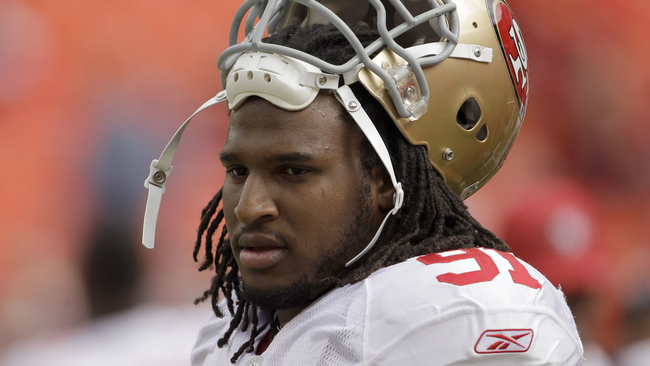